Now that I'm wrapped up with school, I'm going to try and get back on the blogging wagon. One of the biggest developments at KG5CCI the past few months, has been the setup and deployment of some new Innovantennas X-Pol Yagis for Satellites. As you've seen from some of my other pictures, I had been using an Arrow mounted to the cross beam on the G-5500. It sorta worked, but there is something like a 30db difference in signal on the VHF/UHF frequencies if you get polarity mismatched - so sorta working didn't cut it. A buddy of mine (KB1PVH) had put up some LFA Loop, Cross polarized Yagis, designed and manufactured by Justin, G0KSC, and had been very happy with them. They were the size I was looking for, manufacturing and shipping was relatively inexpensive (especially considering they came from England) and the performance looked good. I decided to give them a go. A few months after sending the necessary emails and exchanging the required funds, they arrived. 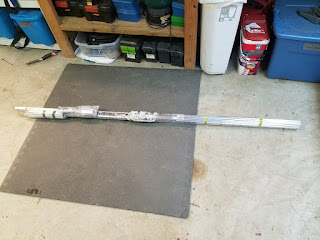 Packaging was well done, all the pieces survived the trip across the pond well. 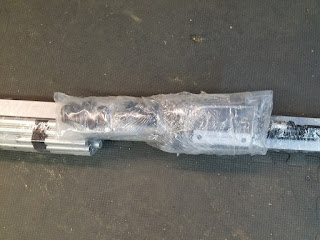 There was a ton of plastic wrap to cut thru. Not a bad thing, but have the razor knife handy :) 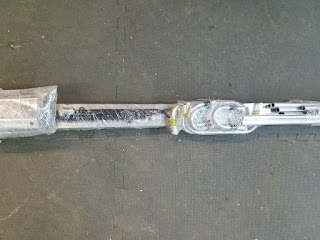 The day was hot, so I setup my portable tripod inside my shop and cranked the A/C to maximum. I knew I'd be sweating putting everything together. It got a little crowed, but it was nice to keep everything out of the weather until I was ready to test. The instructions were straight forward, and the assembly was easy. I sorted all the elements out in a line on the ground, matching size for number, and started in. Everything fit in place smoothly, and while my power screwdriver was nice, it all could have been easily assembled with a hand powered one too. The bolts that held the elements themselves in place were chosen well, with an 'under-flush' design that completely hid the nut from view, and then was covered with a plastic shield. The plastic end caps on the elements were also a nice touch, though both them and the shields that went into the nut holes were a little tricky to get in place. I ended up using a small plastic mallet I have for aluminum gunsmithing work to get the plastic in place, without dinging anything up - and it worked beautifully - though I question if that's a standard tool in most Ham's inventory. 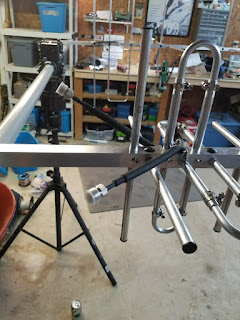 If I had a complaint about the assembly, it would be the match/balun configuration - especially on the 70cm side. I would guess that the balun was made for a non cross-polarized beam, because when attaching the horizontal, the vertical driven element got in the way. When attaching the vertical, the horizontal got the in way. The actual pigtails coming off the balun were also the same size - indicating that they were MEANT to go straight back, and not off to an angle, but off to an angle was the only direction they would go. I asked KB1PVH if he had the same issue, and he did - he said just run the balun however it will go, then use coax to loop it back around to the polarity switch, which I did. The pigtails got a little smooshed, but they seemed to handle it OK.

I also really didn't like that I had to stack multiple nuts on top of the oversize bolt to clear the boom (it just felt dirty.. I can't explain why) but I suppose it's no different from having a slightly extended pigtail on coax feed. I also found out that Innovantenna makes a longer balun, so you don't have to cut your own coax and have an extra connector in there - In retrospect, I totally should have done that. Making my own jumper to run between the balun and the coax switch wasn't a big deal, but with weak signal stuff, every .02db matters. If there's any modifications I might make the future, it would be rolling my own match with offset pigtails, and cut exactly to the length 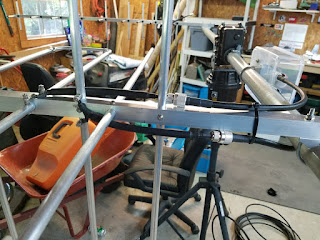 The 2 Meter side went a lot smoother, bigger waves means bigger parts and a big more room to navigate around. I still didn't really care for the balun construction, but at least I didn't feel like was stressing the pigtails. Once both sides were assembled I hooked up my coax and my relays (more on that later) and took them outside for testing and tuning with my assistant..ermm.. uh.. assisting. 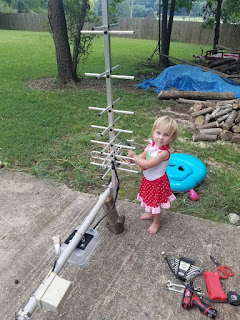 If you've never messed with an LFA loop before, G0KSC build them with a sliding tube inside a large tube, that is then held together with pipe clamps. This makes it easy to loosen the clamp, and then make the loop larger or smaller. This may actually be my favorite 'feature' of Justin's design. It is super easy to fine tune your drive element to the exact operating frequency for the AMSAT band. I pointed the beams straight up and adjusted until the analyzer was closer, then fine tuned them a smidge more once I got them up in the air. 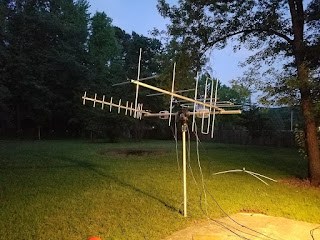 All in all, I would definitely buy another G0KSC designed antenna. There are a few things I didn't like about them, but they sounds great, went together easy, and weren't overly priced. I had a few issues with actually ordering them (emails got crossed, delivery time was a bit longer than I expected) but the design is solid.  If you're looking for a great set of cross polarized yagi's for 2m/70cm - I wouldn't hesitate to recommend them.