Wyatt and I have returned from CM93, a pile of logs and some great memories in tow. I'll be writing proper entries about the trip in the coming days and weeks, and processing video too, but for now, here's some pictures of the trip 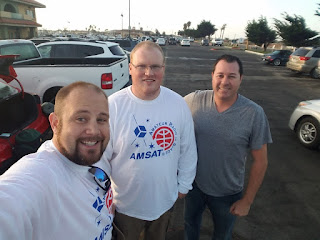 On approach to Santa Rosa Pier 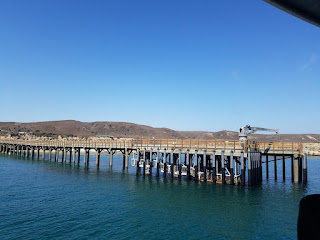 Our Wind Shelter for the two nights on the Island 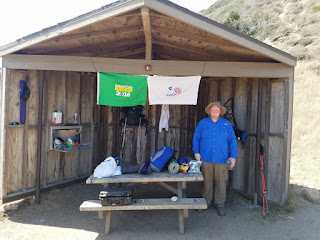 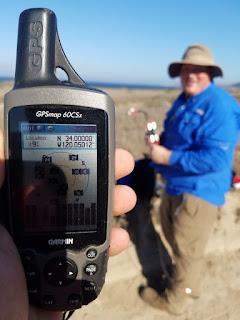 Hiking up Black Mountain on Saturday: 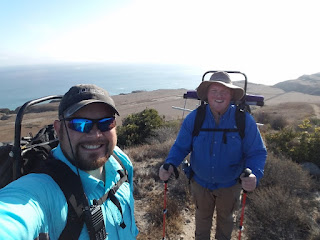 Wyatt operating AO-73 on the Side of Black Mountain 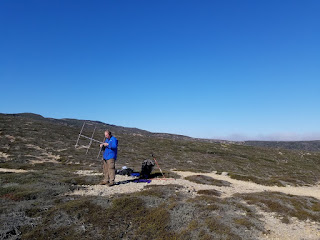 AO-7 Pass from the top of Black Mountain (I was holding the Arrow, Wyatt was tuning) 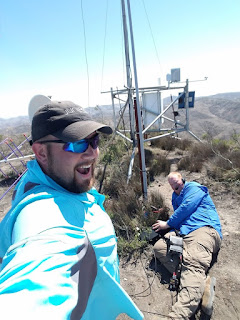 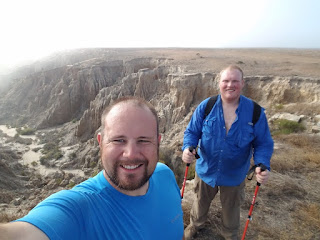 To the Entrance of Lobo Canyon: 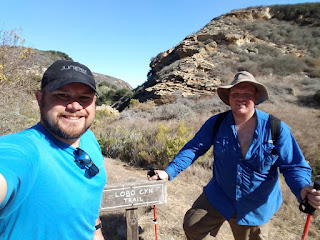 Mouth of Lobo at the Pacific Ocean 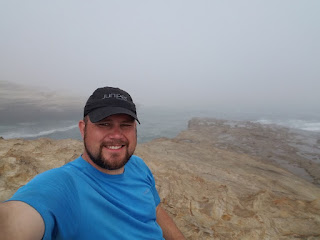 "Painted Cave" on Santa Cruz Island on the way home 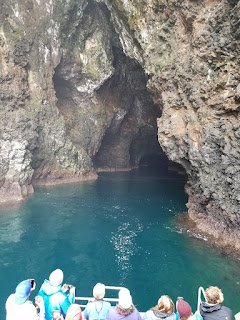 Our welcome back to the mainland party.. 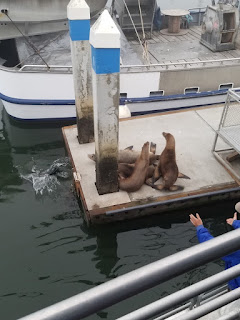 Like I said, lots more in the upcoming weeks, but that's just a taste for now. Thanks to everyone who worked us on the trip. 73!

I make no bones about being a portable operator. I don't have a 'home' station, and my shack is just my workshop, which also doubles for other electromechanicalyardmaintencefirearmy type projects.. It's just the way it is. That said, I do chase certain things in the radio realm, grids, satellite DX, that sort of thing. It seems like though more often than not I find myself places where no one else has been, and while I get sincere pleasure out of handing out 'a new one' to people, I sure wish I could get that new one in my log some times too. Interestingly, there is a way to do this. The ARRL / FCC rules are open in this aspect, you're perfectly allowed to use YOUR transmitter, at YOUR location, even if you don't physically happen to be there, and either yourself or another licensed amateur can use YOUR callsign to work other a different station.  Legal, Legit, and just pretty damn useful for the situation I happen to find myself in.

10 days from now, I'll be sitting on Santa Rosa Island off the coast of California, in the rare grid known as CM93. I'm there to put that grid on the air, and get as many people as I can that new one in their logs. I want CM93 in my logs too.. so how to do that? Why, better living thru technology of course.

First - The antenna. Duh. Always the most important part of any system. All I use for gain antennae are handheld Arrows.. that said, you CAN mount an arrow somewhere fixed. I don't have a rotor, so I basically have to pick a spot a certain bird will be, and hope the angle is wide enough to give a few minutes of usable pass time. A quick trip to Home Deport for a 1" diameter 6' long dowel rod, and a 45° PVC conduit elbow and we're in business. 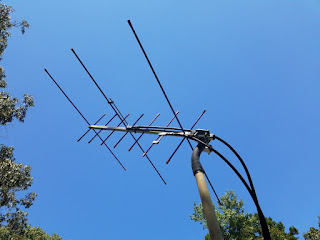 Mounted to my existing tripod (with about 40lbs of concrete stabilizing agents) get it about 15' up in the air, hook up 2 50' runs of LMR400 I keep around, and voila - we have a gain antenna, elevated, pointed at a general TCA for a theoretical pass down the road some time. 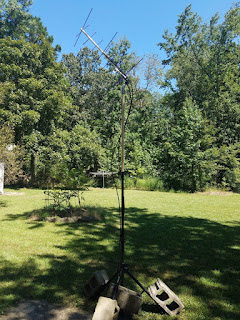 I'm taking my more compact 857d to the Island, which means I'll be leaving my main satellite radio, the Icom 821h at home.. so I went ahead and hooked it up the antenna. Also, since I'm averse to power supplies, I setup a battery, and hooked up a trickle charger set to just cover the current draw while the radio sits on idle. In theory, it should be able to sit like this for a very long time, unless the rig transmits for 30 hours solid.. which in case I'll probably be buying a new radio... so we're gonna hope that doesn't happen. An inline diplexer for filter on the 2m side as well to round it out, and we're in business. 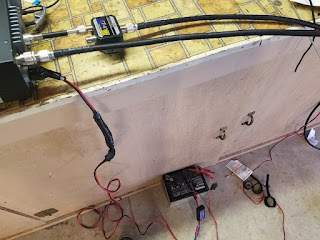 A few passes worth of testing basically confirms what I figured. On high birds (like FO29) If I manually point the antenna in the direction of TCA, I get about 4-5 minutes of usable pass time, without any adjustments. It's definitely not optimal, and I wouldn't build a permanent installation like this, but for my purposes, it will get the job done. Now comes the fun part. Making all this work, when I'm not there.

Within the satellite software realm you have lots of choices, but SatPC32 is the gold standard, and does predictions, simulations, and has automatic rotor and frequency control built right in. Since manually adjusting frequencies for doppler correction is going to be nigh impossible remotely, we let SatPC32 take care of this. 1 CI-V Cat CT-17 USB cable, some fiddling around with setting on the radio, and we're in business. SatPC32 tells the radio what to set the uplink and downlink frequencies too, and adjusts them for doppler correct as it flies across the sky. Nice. 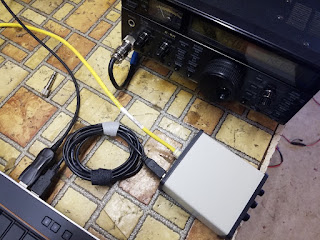 Next, the audio - I've got a Signal-link USB I use for PSK31 HF operation.. it works well, I've never used it for actual voice sound transmission and reception, but no reason it shouldn't work.. Catch was the Icom 821h uses a different accessory cable (8 Pin Din) than my 857d (6 pin mini-din) does... I looked online and was able to find the proper cable, but it was going to be close to 40 bucks and take a week to get here. This obviously wouldn't fly.. So I found a pinout diagram, dissected a piece of Cat5 cable, spliced part of it to an old 3.5mm mono audio cable I had laying around, and another part to a 1/8in mono adapter for the PTT. After a couple attempts I got everything right, and my Signal-link now controlled audio in/out and PTT on the rig. The computer controlled the Signal-link, so there I was - full computer control of the radio. 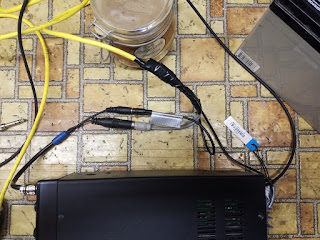 Final piece was the software. SatPC32 would control the rig, but I still had to have some way of hearing the audio and controlling my machine over the internet. For Audio, I setup a machine specific skype account, and had it set to auto-answer, and only accept calls from my personal skype account. I had some issues with feedback and audio levels, but some tweaking managed to get it all under control. Then I used Teamviewer to actually take control of the computer that was controlling the rig, so I could manipulate the passband on linear birds, and do other functions like I was sitting at the radio. Lastly, I made up a little soundboard with some recording of my voice answering calls, and giving my grid and my report.... so It' my voice coming out of my station (without relying on skype to send the audio) no matter what. 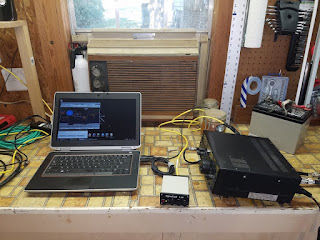 Finished project doesn't look too bad.. it's certainly not a shack for all time, but for this project, it'll get the job done. For testing, I went inside to my desktop computer, and took control of the laptop in the workshop. 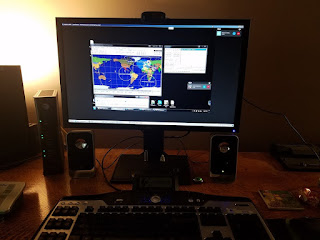 Works like a champ. So far I've made 5 different QSO's on FO29 with it, and I'm practicing to make it better all the time. Hoping this should be sufficient to get me that rare grid, when I'm IN the rare grid.

Special thanks to Clayton, Wyatt and Paul for all their help and encouragement in attempting this nutty endeavor. I seriously couldn't have done it without them.