In a previous life I was around airplanes a lot. I spent 6 years going to college and flight school, and I've got couple of green plastic cards with a bunch of acronyms on them to prove it. These days however I'm known as a PWOP - a "Pilot WithOut a Plane" as the industry just didn't allow me to do the things I wanted to do life. It's fine though, I don't regret the choices I made one bit.. and a big reason is a number of the things I learned from Flight School have stuck with me in my non-aviation related fields, and have served me quite well. Probably the biggest one is the concept of Situational Awareness.

As best I can tell, there is no one definition for what Situational Awareness is. The best explanation I can find comes from Endsley in a meeting on Human Factors in Aviation from 1988. He defined the following:

To try and turn this into something more applicable to those of us using the English Language, if you posses SA, you know where relevant things are around you, you know why they are the way they are, how they got there, where they're going, and what this means to you and others.

At this point I'm sure you're wondering WTF I'm going on about. This is a radio blog after all... well, Situational Awareness is a very applicable skill in radio. Let's take HF for example... depending on where the sun is in relative position to you on our planet, propagation to someone you want to talk to may be affected. You're likely not going to do too well trying to nab that DX contact a few thousand miles away on 10 meters when both you and him are in the dark. You would likely aim for when you both have some sort of F layer excitation occurring and the frequency you want is being reflected back down to earth via the atmosphere, ie, when the sun is shining. Recognizing this fact and acting upon it is an example of Situational Awareness, albeit one that only requires rote understanding of HF propagation mechanics, and as much time as you need to process the idea with your gray matter.

Now consider something like a LEO Satellite pass. You will have visibility to a typical SO-50 pass for about 11-13 minutes, depending on a whole host of factors. The pass will always start generally to the north or south, and traverse across the sky towards the south or north (respect to ascending/descending passes). Now consider you want to work someone on said Satellite that is south of you. That station has their own visibility path, relative to their position on the globe as well. Your station and their station will have what is known as a 'footprint' or a 'window' to work each other, where the satellite is in view of both of your stations. If you're close together, say only a few hundred miles apart, that window will be very long, as your view of the satellite will be similar to what that other person's view is too. If your stations are far apart, say a few thousand miles, the overlap will be shorter.. sometimes MUCH shorter. Now consider something like a rare DX station, that lots of people are going to want to make contact with. Calculate up all these different windows from Station A to Station DX and some people are going to have a lot of time to make the contact, some people are going to have a short amount of time, and it's all going to be relative to their position on the globe, and their view of the bird.

So, where am I going with all of this. If you have superior Situational Awareness skills, in your head you're probably recognizing all the elements (stations) in the environment (satellite view) within a volume of time (window) and space (locations of all of this). You are comprehending their meaning (some stations will have more time than others) and projecting their status (when is the 'best' time to call for each) in the near future (when should I call). Head asplode yet?

Let's try this as an exercise. You have a DX station in the country of Sint Maarten. There is a descending SO50 pass that looks something like this at AOS: 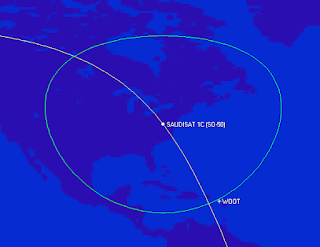 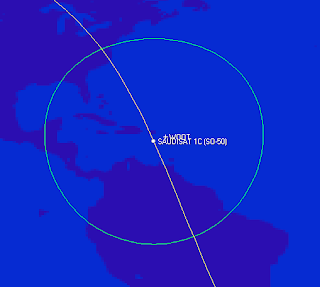 And This at LOS: 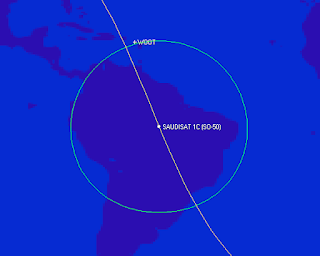 And of course, all sorts of incremental variations of the footprint across the path of the bird.

Let's say you've got two stations that want to make contact with PJ7, one of them is in Iowa, the other is in Florida. The distance between IA and PJ7 is significant, so the window is going to be small. The station in FL on the other-hand is relatively close to PJ7 (in satellite terms) so the window is going to be nice and long. When AOS occurs in PJ7, should the Florida station immediately key up his/her mic and make contact? There's no rule or law against it, that person certainly can.. but SHOULD they? Consider the IA station now, when PJ7 goes AOS, should THEY key up there mic? Probably, but in the realm of situational awareness, you should KNOW. Maybe there's a station in Manitoba that also wants to work PJ7 as well, if there is, then IA should standby, as MB will have even less time than IA to make the contact. Every time you add in a new station, you have to add in a new element into your SA calculations. Let's consider adding Illinois, Ohio, Texas, Arkansas and North Carolina to the mix. Now consider the power and ears of each station - as some stations can obviously work to lower elevations than others, and some stations can turn up their transmit to 11 and crush everyone else. Consider a special circumstance like a newer operator not used to rapid fire Satellite QSO exchanges.. Consider that the DX station may not have the best operating environment and may not be on the Satellite right at their AOS. Consider interference from non-satellite users operating outside the band plans... and consider this, consider that, and on and on and on.. Every time there's something new to consider, it's a new element in your Situational Awareness calculations that impact your decision of when to hit that precious PTT button.

So where does this leave us in the real world? Well, that depends. On some passes, on some birds - what I described happens. All the operators have good situational awareness, make time for other stations with small footprints, abide by the golden rule of "If you can't hear the bird, don't transmit" and generally are aware of what's happening. These passes are great, and DO happen. A few days ago I worked AO-85 from here in Arkansas, and had a 2.7° TCA elevation towards the Northeast. That's a pretty stinking low pass.. I managed to work N9IP/VO1 from a rare grid in Newfoundland on this pass, and it was a blast. What is interesting though, was that there were a bunch of stations on the pass, with a much bigger footprint than me, that held tight. They knew I was there, they knew I'm a portable operator, they knew I was hunting for Steve. They stood by, let me complete the QSO while I had a window, and then called N9IP after my window had expired, when they still had plenty of elevation. It was a beautiful thing. Everyone got the rare grid, no one was upset, everyone was polite, and most importantly - everyone had great situational awareness. Does this always happen? Hardly... most of the time everyone adopts a 'HAVE TO THROW CALL OUT RAWR RAWR RAWR' mentality, and 1 or 2 might get thru, and the rest are shut out. I understand, it happens.. but it shouldn't have too. In a later post I fully plan on discussing my own personal rules for satellite operating and how it can lead to a more enjoyable hobby, but I've written enough for now. Just remember this whole idea about Situational Awareness - it will make the radio world (and especially on Satellite) a better place.
Posted by KG5CCI at 11:39 AM