CM93 Part 2: Amateur Radio from the Edge of America

This is Part 2 of the Santa Rosa Satellite Expedition. I've been swamped with work the past month, so I'm a bit behind. I'll try and get Part 3 done over the holidays.

As discussed in Part 1, you're pretty much on your own on Santa Rosa Island. As Amateur Radio operators, we're used to our technology being functional 'when all else fails' - but this is different. Modern communications systems haven't failed, they simply don't exist. There is no electricity, so things like power supplies and amplifiers aren't an option. You've got to bring your means of communication with you, and your own means and powering that equipment.

First thing to mention, due to its pervasiveness in our society, is that there are no cell phone towers anywhere close to Santa Rosa. I turned on APRSDroid as we left the harbor just to see how long we could get pings from the Cell phone.. we never even made it to the closest of the Islands, let alone Santa Rosa. 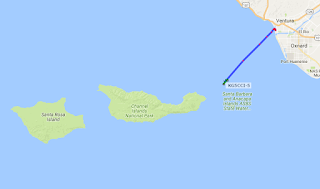 Now, interestingly enough on Saturday afternoon while on Black Mountain, I was sporadically getting signal. I have no idea which towers it was coming from, but it was there. Also Sunday morning down next to the ocean (in the middle of the fog) I was able to grab a screenshot of that 1 precious bar of 4G LTE signal while in CM93XX. So long story short, Cell Phones *might* work.. sometimes.. maybe.. for a little bit.. but don't rely on them. 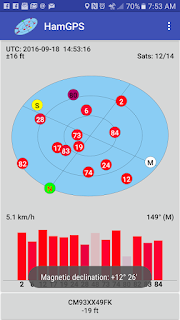 But hey, remember, we're hams right? Who needs cellular signal! Just talk on a repeater, right? This is Southern California after all, and the repeater network is extensive. Heck just next door on Santa Cruz Island, Diablo Peak has a 220mhz repeater on it, you can basically see it from CM93 with the naked eye. We had 7 repeaters on our list for communication for the trip, as follows:

Diablo Peak was obviously outstanding. We could get into that repeater anywhere on Santa Cruz (including the campground) using an HT at minimum power and a rubber duck. The only real problem we found on it was *no one* was ever on it. We constantly monitored it thru the weekend and I don't believe we ever heard another soul. A shame too, cause it sounded great. The other SBARC repeater on La Vigia Hill and Santa Ynez Peak worked great on our HTs from basically everywhere OTHER than the campground. As mentioned in Part 1, the campground was located in 'Water Canyon' and the 200' - 300' walls did a number on signal any direction other than precisely east. A 500 yard walk out of the canyon though, and you were easy copy full quieting on an HT with minimum power. The Channel Island Harbor Repeater back in Ventura was iffy. Sometimes we could get into it with a duck an 5W, sometimes we needed to use 10 Elements and 20W to get into it, and then were scratchy. The direct line of sight back to Ventura went over Santa Cruz Island, with it's 2000' mountains. I think this probably gave us the fits, and when it WAS working on the HT, I think propagation was assisting us. Speaking of propagation, that brings us to Santa Catalina. Distance from Santa Rosa to Santa Catalina is right at 100 miles. It's all over open ocean, but that's still about pushing the limits of what you can do with 5W, FM, and a rubber duck. Sometimes we could get into the Catalina repeater no issues with an HT, sometimes we couldn't.. and the differences were stark, it either worked, or it didn't. That said from the top of Black Mountain we were consistently able to get into the Catalina repeater using a beam and 10W for comfortable copy though. The Catalina club had also just installed a brand new 6m repeater on the Island as well, like the week before we got there. We were able to get full quiet copying using a dipole and 5W on that. It was a welcome change to the typical 2m/70cm repeater we're used too in the center of the country. 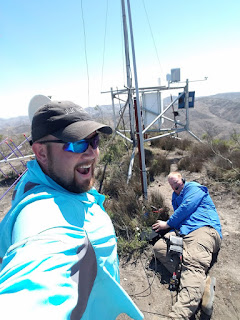 We did most of our simplex operating Saturday afternoon from the top of Black Mountain. Wyatt was trying some 10GHz stuff for the contest, with a small horn and 250mw. He actually heard a bunch of people pretty well, but had trouble being heard running such little power at such distance with low (relative for 10GHz) gain. It was still a helluva effort though, and was cool to watch. 2 meter and 70cm was a hoot. We made quite a few 50-75 mile contacts on each, and ran the VHF/UHF bands with a couple of operators. We actually even worked 1 DX contact on 6 Meters, a Mexican Ham 200+ miles away in Baja, with a dipole and 5W on the 817. That was pretty cool for having NO E-Skip propagation going on. Contact with fellow Satellite Operator KG6FIY on 146.520 when he was using his HT in Los Angeles was also pretty fun. Talking to someone in one of the most densely populated areas in the country, from a desert island mountain top is the very epitome of so close, but so far away that defined this trip.

We talked to quite a few people driving around in the traffic that controls life in Southern California just by calling CQ. They were all really surprised and intrigued to hear about what we were up too. For hauling all of our equipment on our backs to the top of a mountain, and using only what the batteries could put out, I was pleasantly surprised with our terrestrial simplex operations. I think a serious expedition focused on Terrestrial with prior planning or on a contest weekend could rack up some serious contacts.

We made probably 100 HF contacts as well, during a few brief sprints of operating. The Band conditions were really quite awful, and so it was a challenge most of the time when we had planned to operate, but we still did OK. 20M was OK during the day, and we made a few QSOs with European stations, and did alright with the rest of the US on 40m and 20m. I think if you really went out with a dedicated plan to do HF IOTA/SOTA/NPOTA you could do great - but that's just not really our thing, and was more for fun than anything else.

That said, the reason we were there, was Satellites. We worked people on 12 passes and made 120 total QSOs. 91 unique stations were in the log. We operated from a few different places on the Island, and all were OK since we were primarily concerned with facing east. At the mouth of Water Canyon there was a picnic table that worked well to set the gear on. Typically one of us would log, and the other would work the pass. We also operated one evening from the CM93/CM94 line, as it was only a 3/4 mi walk from the campground, and we actually had a ham down in San Diego who was interested in working us on 6M from CM94. We did Satellites on the side of Black Mountain on the hike up and back, and from the top during our simplex afternoon.

There were no real surprises on the Satellites, other than the great disappointment we had at an afternoon FO29 pass where the CW lids were pounding the bird so hard that our little 5W SSB signal was barely being heard. There were a lot of people that were putting all their marbles on that pass to work us, and couldn't find our signal in the passband due to the selfishness of others. A special thanks to those jerks who insist on Satellite QRO CW because you fail as operators any other way. I hope your transmitters fry and you give up the hobby.


Most passes we used Wyatt's FT817x2 (one to TX the other to RX) and a standard arrow. We also had my Alaskan Arrow for a few of the really low elevation passes, and we used my 857 on the SO-50 passes when more power was a necessity to burn thru the lids. For power, a single 8.4AH Zippy LiFePo4 battery would run both rigs during a pass, and worked just outstanding. From an equipment perspective, those little Batteries are one of the few things in my kit I really don't see any room for improvement on... they just work.

With the dual 817s, most passes were done with only 5W of transmit power. During a typical pass we would barely use 1/2AH of total power juice from the battery.  We brought 4x 8.4AH batteries with us, and maybe only used a bit more than half of the juice we had available, including all the Satellite passes, several hours of HF (usually using the 857 at 25W) and several hours of VHF/UHF simplex work, and several long repeater QSOs. I'm glad we had lots of Amp Hours available though, we kept from running any batteries below 20% and operated all we wanted with any power levels we wanted, for short periods of time.

Even though we were wildly successful with the 817/857 combination, If I were going to go back, and not focus on as much hiking all over, I'd probably try and find a way of getting the Icom 821 out there. I'd never used the 817s before, and while I've tinkered with my 857 on Satellites, I've really become quite addicted to the constant power, extreme sensitivity, and dual band convenience of the 821. For what we were doing though - backpacking and hiking - and space and weight was a premium, I think the choices we made for gear were just fine.

All in all, if you're planning on a radio trip to CM93, for gear remember that every pound counts, make the most out of your power, and be prepared to use your gear not only to rack up QSOs, but also to communicate with the outside world. Cause you really are operating from the edge of civilization out there.. and that (to me) is truly what radio is about.
Posted by KG5CCI at 9:13 AM