I always complain about being busy, but it's no joke the past month or so. Work stuff is increasing at a high pace, and my grad school work is entering it's final sprint. I did however manage an interesting, fun and productive few days on the radio.

First, FO29 is fast approaching apogee on ascending passes. When it does this, Europe gets just ever so slightly in range of me here in Arkansas, and you can really stretch the footprint. A few months back I made a great contact with Jerome, F4DXV on FO29 from his portable location in JN05ha where he has a perfect horizon view. I was on Shinall mountain, here in EM34st (my normal low elevation spot) and we made a great contact at 7587km - 13km shy of the record I set with F4CQA a couple years back. Well, we both knew more was possible, it was just a matter of finding the right spot and right time. Fast forward a few months to February 26th.. FO29 wasn't quite at apogee, but she was close, and a Sunday morning was the perfect time for both of us to give it a shot. Jerome headed to his portable location in JN05ha, and I headed up the road to Mt. Nebo in EM35IF. Even though it was almost a 90 mile drive for me, it was the perfect high altitude location, and it was 20km further in great circle distance, making it a good candidate for a new record shot. We both got on location, setup our cameras, and waited for the bird... which of course showed up on time and quickly exchanged our grid codes and reports, and voila - a new record was in the book.

I've got some video, but I just haven't had time to put it all together yet. For now, Here's the Audio Recording that Wyatt, AC0RA managed to capture of both of us, and some pictures: 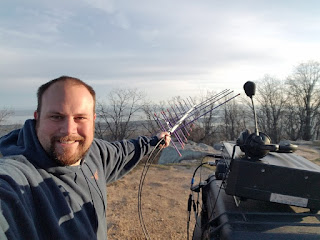 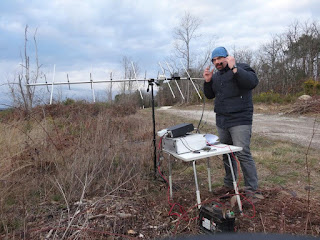 Thanks to Jerome for suggesting the idea and congratulations my friend on a WORLD RECORD qso at 7608km. Also thanks to Wyatt, AC0RA, for sitting in the middle and grabbing a nice recording for us.

On a nowhere near as epic, but still cool note - had some good mail this week: 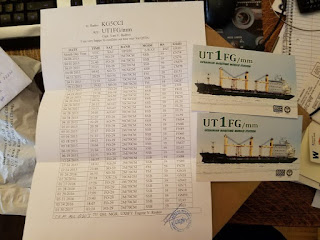 Eugene UX0FY, who is Yuri UT1FG's QSL manager sent me a list of grids that I've worked the captain in the past couple of years. I was especially keen to get my hands on CM79 - which is where I worked Yuri during his cruise up the west coast a few years ago, and is one of the most difficult of the Magic 488 to work. Yuri and Eugene are both sort of tough to get in touch with outside of the radio, so hopefully if they (or you, and you know them) are reading this, a huge thanks to you guys from sick radio nerds like me. Living vicariously thru the satellites to the DX on the other end is what this hobby so damn interested. Best 73s, and here's to many more.

With this new grid infusions, it brings my grid total to 609 confirmed.. if I ever get around to taking my cards to a checker, that will put me in the top 20 grid chasers of all time. Pretty crazy for a guy with an arrow and only a couple years under his belt eh? Then again, I'm still not even to 50% of what the top 5 have, so there's a long ways to go. 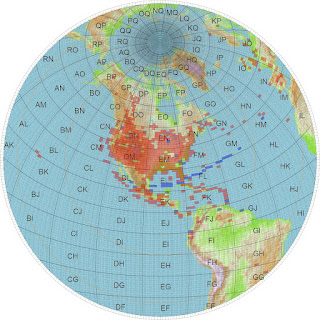