I've been so swamped with school and work, and playing with the rapidly growing kiddo, I have let my radio pursuits slide a bit this summer. I've read on Twitter there's been some great new ops showing up on SO50, in rare grids. I've really been meaning to get out and work more of them, it just hasn't happened. Yesterday though, I resolved to chase some DX.

Esteban, HC1JB, has shown up from time to time on SO50 recently, and he's worked some folks in the southern part of the US. It's always late in the pass, but after running the numbers I figured we should have a window. Emails exchanged, we settled on a descending SO50 pass with TCA's of around 50° for both of us. We'd have a 3 minute window as SO50 set for me, and was rising for him. He warned me though that from his QTH in Quito, Ecuador, he would be fighting mountains and volcanos for a clear view. I assured him that I could go all the way to the horizon, so I'd try and spot him as much elevation as I could. For this particular angle, I chose a hill in West Little Rock about 10 minutes from the house.. it's not as high as my 'mountain' is, but it gives me a wide angle to work with, and has a great uninterrupted horizon from about 150° to about 270° 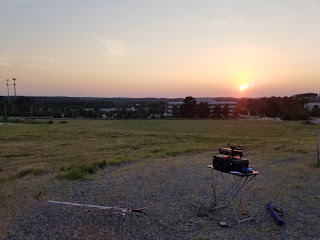 The pass just happened to be a few minutes before sunset too, so while the bird streaked across the sky from AOS at 340° to LOS at about 160° I was treated to a great picture of the sun sinking over the distant sky. Esteban called me right on que with about 45 seconds to go, when I was down to 4° of elevation left. We quickly exchanged reports and said our 73s. The voices on the transponder all switched from English to Spanish, as US operators went LOS, and Latin American hams took over.