I am lucky to live in a state like Arkansas. It's one of the few places in the US where cost of living is cheap, the people are great, geography is varied, and we have State Parks that rival the best in the country. One such State Park is Pinnacle Mountain, and only being 15 minutes from the house, I consider it (along with Shinall, which I can drive up) *my* mountain. 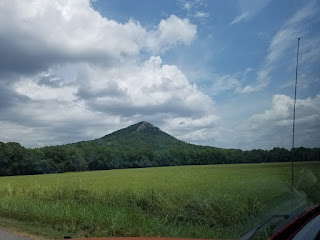 This particular Sunday, I was in a mood to go run up my mountain, and I realized that I hadn't done a SOTA activation in nearly a month. I will sometimes just grab my HT and head to the top of the peak and call out on simplex, but it seems as if it's been getting tougher all the time to find customers there.. so, with the impending CM93 trip coming up - I decided it might be time for a dry run with some gear I don't normally use for the birds. I grabbed my 857d and my FT60, 2 pieces of LMR240, my trusty LiFePo4 battery pack, adapters for everything, and my arrow. I checked to make sure there was a pass coming - and indeed SO50 would be overhead in about 2 hours. That was all I needed.. I tossed everything in my backpack, made sure my camel-back bladder was full of water, and hit the road. 15 minutes later I was in the parking lot, and on my way up to the top. 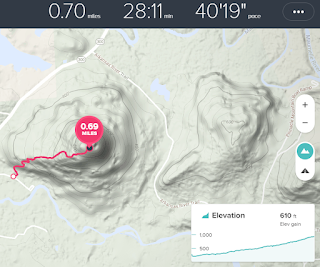 As you can probably tell from pictures, Pinnacle is basically just a big hill rising straight up out of the Arkansas River Valley. There's very little approach, you just get on the trail, and start climbing. I made pretty good time getting to the top, especially considering I was hauling 30 pounds of radio gear, first aid, and water with me. I'll have to do at least one hike roughly double the elevation of this out on Santa Rosa with a similar amount of gear.. and we've allowed 2 hours for that hike, so I think I'm on pace to where I should be. 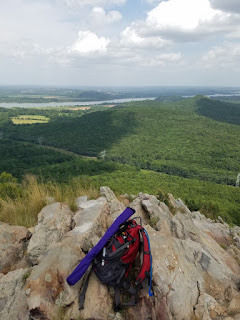 Once I got on top I went out to the 'West Summit' which is just a few foot lower than the 'East Summit' but a bit more isolated by 50 yards or so of scrambling over some boulders. It's also a bit further away from the trees, and has a better 360° view of the horizon, which is always important for Satellites. I set my gear up and called CQ on 146.520 for a bit, hoping to find some local folks before the pass at 2016UTC. To my surprise, I had quite a few takers. A little bit of power and a 3 element beam makes things much much better than a 5W HT and a whip. 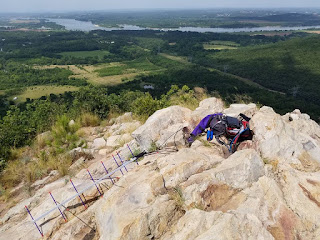 After I made a bunch of simplex contacts, I got setup for SO50. I would transmit with 10W on the 857 and receive on my FT60. I'd used this combination before, but it had a while. This is where I ran into some issues.

First - you have to set a 67hz PL tone to get into SO50's transponder. This is no biggie on an 857, you go into the menu, scroll down with the coarse adjustment knob til you find the PL tone setting, then use the big knob to select the PL tone setting.. save this, go back to the VFO, and then enable the tone on the frequency. Everything went fine until I tried to scroll with the big knob... no such luck.. I could scroll UP - but whenever I'd spin the wheel counter-clockwise.. nothing happened. This seemed to be happening on all menus and all bands. The more coarse step knob worked to scroll down, but the big dial simply wasn't responding. Well this sucks.. especially since this is the ONLY way to get the proper PL tone assigned, and unfortunately the menu doesn't start over at the bottom when you go to the top. I had run into this before, when my 857 is sitting in the sun, and it gets hot - and for some crazy reason the big knob doesn't scroll down anymore... No idea why, just does. It usually calms down in a few minutes after getting it back in the shade, but here I was at AOS for a pass lasting 12 minutes, on a frigging mountain with no shade. I covered the rig with my backpack to get it cooling off and went to improvising.

I quickly reconfigured... I'll use my FT60 to TX and my 857 to receive.. 5W uplink on a sunday afternoon is not optimal on SO50, but I'll give it a shot. I was able to work W5PFG/P in DM66 quickly - but after that I couldn't get in. To further complicate matters since I was now receiving with the 857, I had to adjust doppler there by, you guessed it, dialing DOWN - which I couldn't do. No problem, I can use the coarse control for this. Oh but wait, there's more! By default the 857 does 25khz steps on the coarse dial on 70cm, you have to change it to 5khz step in the menu by <drumroll> scrolling down with the big knob. If there is any problem with the 857's design, it's the extremely menu based options that requires every single setting to be controlled from there as a dial option. When something happens to your dial, you're basically hosed.

Around TCA of SO50 I got the 857 cool enough in the shade, that the down dial finally started responding, so I reconfigured back to my initial setup - TX on 857, RX on FT60. I got PL tone set, got TX freq set, and now I should be in business. However, this is where I ran into issue 2.

When I keyed up on the 857 I noticed I wasn't hearing myself (or ANYTHING) on the downlink. Once again, something wasn't right.. One of the more interesting phenomenon Satellite operators experience, that isn't that common the other parts of ham radio, is the concept of 'de-sense'. Since we're almost always cross-banded, you have to keep all of your TX power out of the front-end of your RX box. When you don't, it wipes out what you're receiving, and you lose your ability to be full duplex. This was now happening to me. Keep in mind that I normally am working Satellites with my Icom 821. It's a great rig, dual independent VFOs, extremely sensitive and good power levels. It also seems to be extremely resistant to desensing. I can't really explain why - perhaps the two independent VFOs are shielded a bit better, who knows, but with the 857 and ft60 combo though, some serious desense was happening.

In the past when I've had issues with desense, it's typically because something is not tuned right. The arrow is a nice hardy antenna that has a well built gamma matching device and I've always tuned all of my antennae as best as I can out of the box. I hadn't checked the tuning on my arrow in a while though, but it's been working well, so I haven't bothered.. well, until now. One of the other differences between my 821 and my 857, is that the 857 has a built in SWR meter, while my 821 doesn't. So even if it was getting out of tune, I was using a rig that is resistant to desense, and I'd have no built in methods for checking - unless I felt like putting a meter in line. So, at this point I keyed up, glanced at the SWR meter on the face of the 857, and saw it about halfway up - indicating an SWR in the range of 3:1. That's no bueno.

Lacking the time (and a Phillips screwdriver) to do anything about it, I just decided to finish the pass as is, and transmitted in the blind when I thought I had an opening. Half-Duplex is not how I like to operate, but it will get the job done. I managed 3 more contacts in the last 10 degrees of the pass, and had enough to call the activation complete. Phew.

I grabbed some video before packing my stuff up:

And headed back down the peak. I had come dangerously to borking the activation, but got it done. I was glad, but I had to some work to do in the shack later on. That said, still a great afternoon on my mountain.