The Atomic AMSAT Roadtrip - Part I


On July 16th, 1945 the United States of America detonated the first Atomic weapon in history. The Operation was code named Trinity, and for a brief moment early that morning, the New Mexican sky was lit up by a light that had never before bathed earth. 37 years later on July 16th, 1982 I was born. It doesn't necessarily mean anything, but with my interest in physics and science, it is obviously an auspicious date. I've always wanted to visit the Trinity site, and see things first hand - this year, I had the chance. 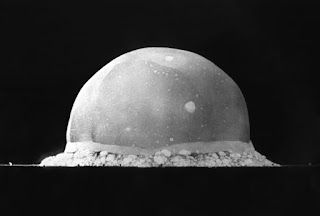 As many readers of my blog may know, Gabe, NJ7H, travels the country as what you could call the closest thing to a professional rover this hobby knows, besides people like UT1FG and ND9M. In his short year or so on the birds, he has activated over 250 grids in the US, Canada, and several other countries. Gabe is also a pilot, lives (relatively speaking) close, a few grids away in EM15, and is an all around good guy. Recently during a chat we were talking about Trinity, and I expressed my desire to go there sometime. He said 'well, what about the spring open house in a few months!' - I was sold. I made arrangements with the family, and started planning

The Trinity Site is inside White Sands Missile Range, which is still an active US military installation. It is only open to the public twice a year, once in the spring, and once in the fall. As you would think, places that we test nuclear weapons are not exactly close to civilization, and WSMR fits that bill well. Most of WSMR is in grid DM63 (for us Sat Ops) and it is also deep in what is known as the Chihuahuan Desert, surrounded by mountains in all directions, and at least 2 hours from the closest lodging of any significance. Too add to this, Gabe and I are both active sat rovers, and we had to make a plan to hit as many grids as possible to and from the site. If you know anything about Gabe, you also know that if you're within about 1000 miles of an international border, any roadtrip requires you to cross it. This led do a directive to visit Mexico during the journey too. Also since this was an Atomic roadtrip, we sought out any other landmarks of interest, and found the site of Project Gnome in southeastern New Mexico near the town of Carlsbad, that would be on the way home after visiting El Paso and Juarez. We had a general plan made. 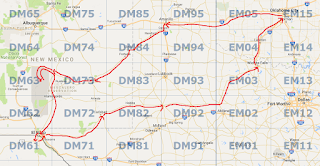 Fast forward a couple weeks, and we were ready to go. I packed up the Mustang and headed for Oklahoma City (5 hours from the QTH) to crash at Gabe's Thursday night so we could get a jump on the trip the next morning. Patrick, AKA 'Jacket Guy' (A non-ham friend of Gabe) also decided to join us on the road trip, and ended up being an awesome addition. We also planned to meet a friend of mine from Arizona, as well as some of Gabe's former classmates from college. All in all, we had a crew. We picked up a rental car (the number of people going dictated something a big larger than the Crosstrek or the Stang) and headed west on I40. We didn't get too far before chatter from the peanut gallery (Other Satellite Ops on Twitter and Hangouts) demanded that we stop in EM05. So hey, why not. 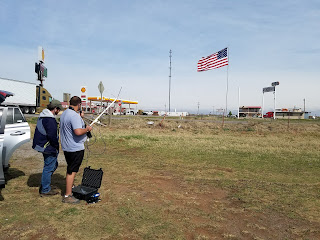 We worked Matt, KK4FEM (who had asked for the stop) and a bunch of others. Now, it's worth mentioning here - that we hadn't really told the rest of the AMSAT community who else was with Gabe and me. I'm the one taking the picture, Gabe is operating, and there is another gentlemen (wearing a jacket) standing by as well. This instantly created the widely trending question of 'WHO IS THE JACKET GUY??' on the Atomic Amsat Roadtrip. Patrick was instantly christened as #JacketGuy.

Continuing down the trail our next goal was to stop on the DM95/DM94 Line, south of I-40 and just east of Amarillo. We had an spot picked out and everything, however due to a sick fascination with airplanes and arguments about what was the best <insert plane here> in the rover vehicle, we totally blasted right past our exit and had to settle for a spot just in DM95. This is when I also remembered my fun discovery of Periscope Live Video via twitter a few weeks back in Wisconsin. I made a few contacts on my station (for rover credit) and then went live:

After our silly Periscoping, we continued west and south. We missed (yet another) exit in Amarillo and had to loop back to head south. Our next stop was a Walmart in DM94, where we grabbed some gas and other provisions. We also went live here while working from the parking lot.

We continued west and South, making one stop in DM84 next to a feed lot that smelled like it. At this point we were hitting grids frequented by Clayton, W5PFG and chaser demand was light, but were racking up credit for our own rover scoreboard. The journey progressed west and south, and afternoon turned into evening. Finally after many miles on the road (and an interesting experience with a crazy homeless guy in Roswell) we hit our first day's destination - The Valley of Fires Campground. 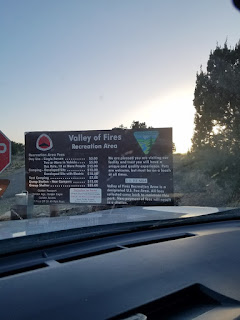 We managed to get our camp setup, and headed back into town for some late evening grub, and made further plans. At this point we were only a few miles from the DM63/DM73 line and figured we should get it activated that night on a nice SO50, AO73, and EO88 trifecta of passes. We drove in the dark until we found the line, and put it on the air. Since this was a set of awfully rare grids, I actually worked NJ7H on AO73, via the my remote station, on my phone, with sketchy reception barely keeping it together for my own chaser credit. After that I setup my own portable station and jumped on the SO-50 pass to join in the rover activation fun. We promptly shut down after those passes, headed back to camp, crawled into our tents, and passed the @#$% out. It had been a very long day, and we had another long day coming up.