I didn't get a long blog completed for this week, however since my papers just arrived this morning, I suppose I'll make it official: 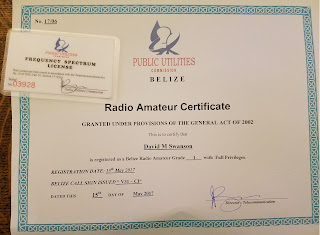 I'll be QRV as V31CI in Belize, operating from Ambergris Caye in EK67 (with side trips to EK57 and EK68) from June 20th thru June 27th.  This is a family vacation style activation so expect no more than a few hours (tops) of operating per day. Since NJ7H was just down there a few months ago, I won't be hitting it as hard as I figured I would, so focus will be on the easier birds that have good footprints to the entire country, and any Non-US hams that are interested. Primarily listen for me on FO29, SO50 and AO-85. I'm also happy to take sked requests if there's a pass in particular you're after.

I'll be taking along the 857, and some wire dipoles as well. I plan to try and do a little HF and some 6 Meter if the bands open up as well. I'll have my laptop and digital modes are an option too. Also, as many may note, June 24th is Field Day. I'll try my best to be on the popular passes handing out a DX station station credit via Satellite, and on HF as well.

That's all for now, I'll try and finish up my tech blog for next week, I've got exciting things I've been cookin' up in the workshop.