If you will remember the blog post from last fall call Missing DX - Cause YOU'RE the DX I wrote about how I was in the process of building a home station. This is a drastic change for how I normally operate, portable holding an arrow - but there are certain advantages that you get from having a fixed station at the QTH, including resiliency to weather, remote operation, ability to run more power (buhahaha) and the ability to work "yourself" when you go out roving with a special event or club callsign. I've got a ton of upgrades going on, and I have no idea how many parts this may end up being, but I need to get what I'm doing documented for my own reference years from now, and for your benefit in case you have the same issues I have.  Anyway, here's where I'm at with a few things:

I managed to score a used Yaesu G-5500 from a fellow ham after trading him some stuff. I also picked up a LVB tracker at the same time, so instantly that gave me the ability to point my 'arrow on a tripod' actually AT the bird instead of fixing it one direction and waiting for the Satellite to go by. This was a pretty major upgrade for me.
Integration into SatPC32 was easy with the LVB, and now I've got computer control rig command and rotor adjustment all automatic. This is pretty sweet. Not having to have a flash card with all the frequencies, or numerous memories programmed in - the computer doses it all.

If you'll recall I had made my own audio cable out of a scrap piece of Cat5e I had laying around. Well I finally upgraded and got the actual RJ45 to 8 Pin Din rollover cable, so I can hook the Signallink into the Accessory port on the 821h. I had to tweak with the sounds levels (again, and always) on the Signalink to get it right, but I got it working without a whole lot of problems. Using the Accessory port is nice because I can still take manual control using the microphone and over ride any computer generated audio if I'm sitting there at the station.

I was using Skype for my VoIP software in my old model... however it just doesn't work so well with full duplex audio (that is talking and listening at the same time) which is kind of important for Satellite work. I also didn't like a lot of the bloatware that goes along with it being a Microsoft product, so I went hunting for an open source product that had better full duplex support. Clayton, W5PFG, suggested I take a look at LinPhone. After trying it for a week, I was hooked. It runs on the open source SIP protocol, and can work via direct connection, or via a registered proxy. Plus it has an Android App and works on multiple PC platforms, I've been very happy with it since I switched everything over, and don't have any plans on changing.

I like to automate stuff (duh) so of course I built a script that automatically updates the published TLE's for all the Satellites. I've actually been doing this manually for a while, but with perl and tasks schedulers I took it to a new level. What the script does is grab the 'amateur.txt' file from Celestrak, and the 'nasa.all' file from amsat.org, then parses out the TLEs for the birds I want to track, and puts them into a new file aptly called 'daves-picks-tle.txt' on my Google Drive Cloud Account. I can then point all of my PC's to this location (including my shack PC running SatPC32) for it's master set of TLE's for *just* the birds I care about. Add in a Windows Task Scheduler to run said script every morning at 3AM, and voila, I'm always using keps less than 24 hours old. 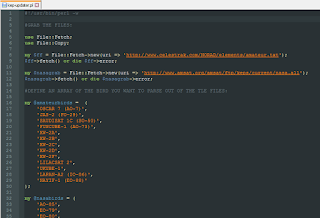 I was also having some issues with Doppler Drift in SatPC32, that I couldn't really explain. In the Manual for SatPC32, Erich mentions needing clock accuracy of 1 second or less, as well as very recent keps to keep your accuracy spot on. Windows is notoriously bad for clock drifting, even with NTP enabled, so I went looking for a 3rd party program, and found Karen's TimeSync for Windows that seems to do the trick. I've got my PC pointed at the time.nist.gov NTP source, and I ask for an NTP update once an hour. 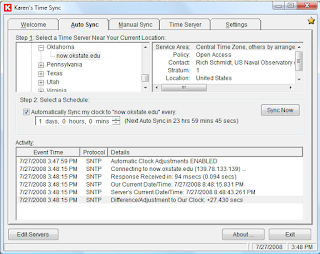 That seems to have solved and clock drift issues, and has helped (There are still issues I'm fighting, more on that in an upcoming entry) keep the Doppler correction on track. The program has a few flakes in it, like I have restart it after running for a weeks straight, but it seems to get the job done. I may write a super lightweight script in perl to do this at some point down the line, but for now it works.

I've still got lots more to talk about. I've got new antennae on the way, I'm working on polarity switching, and I haven't even mentioned my remote automation relays I've got setup, or my problems with automatic doppler correction, voltage issues, and all sorts of other fun...

But that's it for this entry, more next time!