Covering everything that we did on Saturday will make this the longest blog entry ever. So I'm just going to focus on the visit to Trinity, since that was the Apex of the entire trip, and I want to do the visit justice, Part III will cover everything after we left the Missile range.

We woke up early at 6AM the next day, at our Valley of Fires Campground Base. After the long drive and crazy operating the day before, we probably should have gotten more sleep, but the gates at Stallion Army Air Field opened at 8AM promptly, we had roughly an hour drive to get there, and you DON'T show up late, or else you end up in a line miles and miles long to get thru security. We also had a long day planned ahead of us, so getting to the site early was in certainly going to be required. 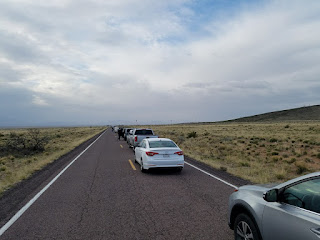 We broke camp, grabbed quick showers, and headed west deep into DM63 and along the northern side of WSMR. After some driving we made it to the Stallion Gate, and found while we were still early, there were a lot of people in front of us. Will definitely get up another 30 minutes earlier if we do it again next time. Once we got in line, we waited for security to start moving people thru. With nothing else better to do, we obviously had to go live on Periscope:

It wasn't too horribly long and the line started moving. We got thru security about 8:20AM MDT and snapped a nice cheery picture at the entrance to the range itself, because once we entered the secure area, no more pictures were allowed until we reached the trinity site itself. 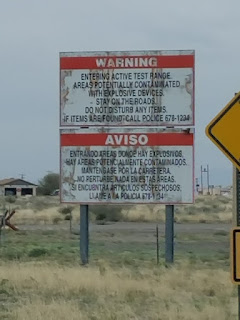 After about 30 minutes of driving out across the range, we finally started seeing the brown National Historic Site markers that designated the Trinity Site. We parked in the well maintained and defined parking lot, and started our walk. There were large chain link fences around the entire area, with plenty of large 'RADIOACTIVE MATERIAL' signs on them. 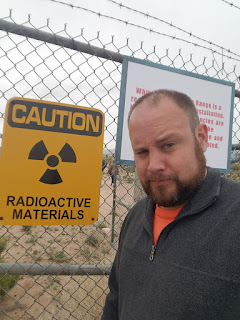 Right outside the main gate to the fence was the remaining part of JUMBO - the container they almost used to try and contain the explosion if it was a dud, so we of course stopped for a picture. 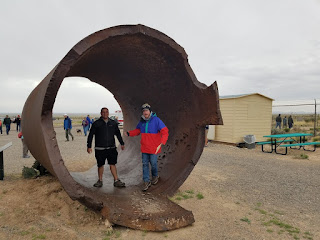 After hanging out with Jumbo, we headed to Ground Zero. It was clearly marked for us. 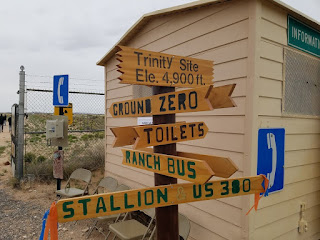 Took some video as we walked:

And of course once we got there:

I did the required Picture next to the Ground Zero Obelisk: 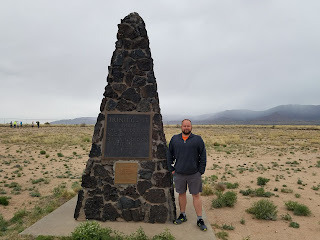 And took a bunch more pictures... 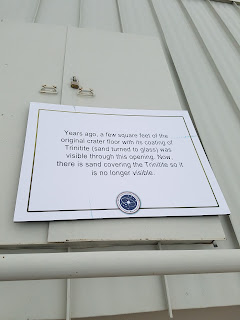 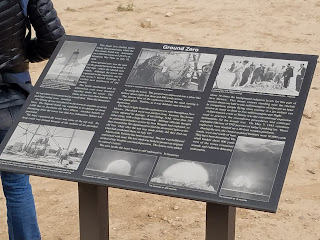 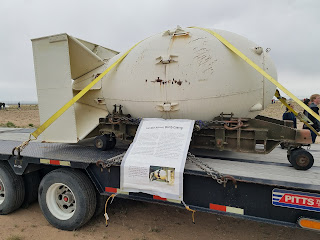 We then jumped on the bus and headed to the nearby McDonald Ranch House, which is where the final assembly of the bomb was conducted just before the test. And of course, took a bunch more pictures there: 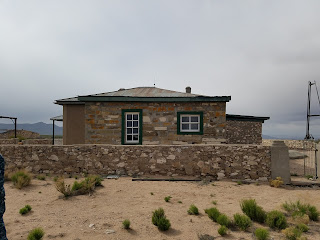 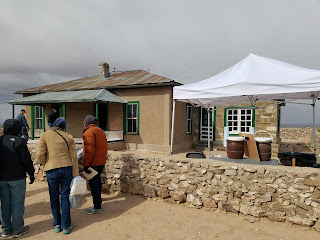 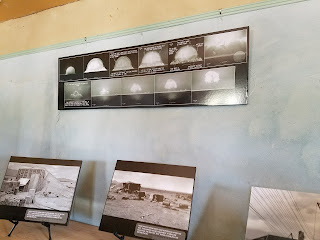 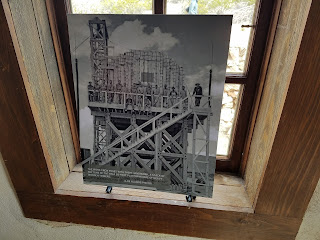 After several hours exploring, we headed back to the parking lot. Said goodbye to some friends, and then headed out. We had a lot more driving to do that day, and we needed to get a good move on.

I was asked by a lot of people what I felt about visiting the site. Normally I do things and go places because it's some sort of awesome crazy adventure. I'm not so sure those words are apt about Trinity. The technology that was developed at Trinity killed hundreds of thousands of people in Japan 3 weeks later. Nuclear testing killed dozens of government technicians, poisoned hundreds of Marshallese Islanders, and isotope development and Nuclear Power led to the disasters in Chernobyl and Fukashima. It has also led to power sources that keep the lights on for 20% of Americans, and saved the lives of countless tumor and cancer victims thru Nuclear Medicine. I've often heard of Atomic Technology being referred to as a Genie, and there's no putting it back in the bottle once it's out. Visiting Trinity was like going to the place where we first rubbed that lamp, and I'm glad I got to see it first hand.
Posted by KG5CCI at 10:17 AM