This is the final piece on the trip to Santa Rosa, and CM93. And It's going to be a bit different from other things you read on this site. Yes, the trip was primarily done to activate the rare grid of CM93, but with the National Parks on the Air celebration of 2016 - the plan was rushed to make sure it would happen for the event, instead of waiting until another year. The Channel Islands are unlike any other place I've been in the lower 48 states... Walking around on Santa Rosa reminded me of South Texas, Wyoming, and the Washington Coast, all at one time, and all in the course of a few miles. Our National Parks are a treasure that we're lucky to have as Americans, and this entry will talk about what we saw when we packed our radios away.

The Channel Islands are actually a newer addition to the National Park System. For many years they were owned by Cattle Ranchers who used them as a fence-less open range area, for grazing purposes. They would bring over young herds on barges, let them forage on the Island for a while getting fat, then take them back to the mainland for sale. While an interesting use of the land, there was so much more than could have been done with them. Eventually thru the trials of time the Islands found their way into the hands of the National Park Service, who have developed them into a wilderness only miles away from one of the most densely populated areas of the country in Southern California.

On our trip, Friday and Saturday was about operating. Yes, we climbed Black Mountain, and explored the interior a bit, but our focus was on making QSOs. Sunday morning we changed gears. We secured our camp very early in the morning, locked up the radios, dropped off our heavy packs at the dock, and headed towards 'Lobo Canyon' on the north central part of the Island. 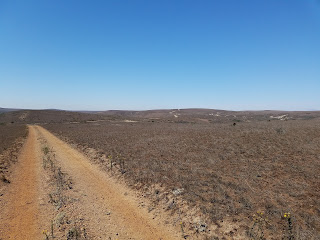 I took this picture on our hike to the Canyon as the Sun came out. It reminded me very much of the high plains country of West Texas or Wyoming. 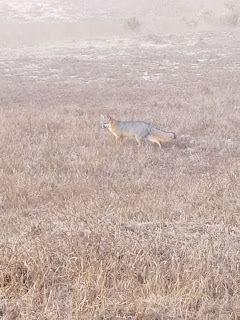 The hike to Lobo paid off quickly, as we spotted one of the rare Island Foxes native to Santa Rosa, but rarely are seen by visitors near the campground or dock. 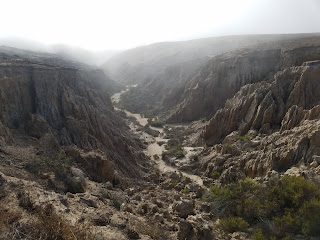 Shortly after the fox sighting, we can to the first of what I can only describe as a 'Badlands' or a 'Scarp' region. Since the majority of the island is a raised rounded dome, where water would flow towards the ocean, these little canyons would form - leaving behind some stunning rock and dirt formations. 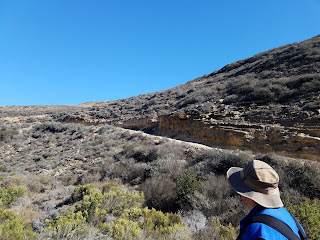 A little ways after the Scarp formation, we began the descent into the Canyon. A long switchback along the Canyon wall slowly dropped us 500' in elevation, and we entered Lobo. 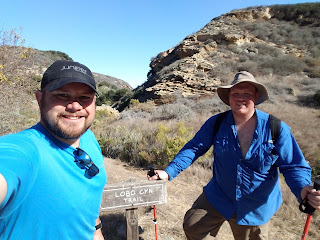 We stopped for a selfie at the sign marking the beginning of the Lobo Canyon Trail. At this point is was 1030AM and we have already hiked something like 8 miles. 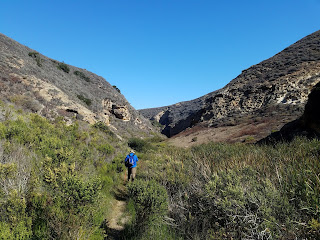 The Canyon started as a more arid environment, but as we progressed we started finding greenery and water. 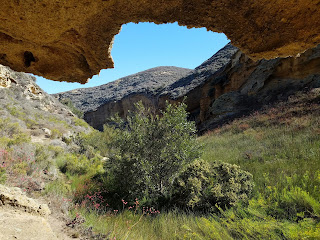 Amongst the green and slowly descending elevation were multiple rock overhangs and cave dwellings that would have served well as shelter to earlier peoples. 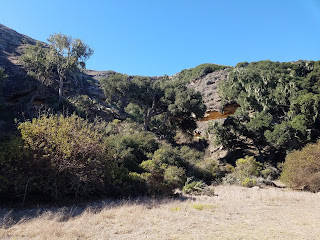 As we kept walking, I got the GoPro out, and took some footage. I've finally finished processing all this footage, and present it to you here:

After exploring the confluence of the Canyon and the Ocean, we started back for the Dock. Our boat was picking us up at 1500 sharp, and we had a flight home the next morning. After getting on the boat, scoring some pizza and beer, we relaxed for the ride home. About halfway back, while along the coast of Santa Cruz Island, the Captain said something about 'The Painted Cave'. Since this obviously sounded awesome, we both ran to the front of the boat and saw what was referred to as the 'Largest Sea Cave in the World, by people who record these sorts of things" 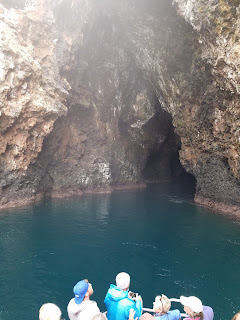 And of course, took some quick video with the phone

Seeing the cave was really cool, and a fitting end to the journey. The combination of rock and water, was really what shaped and made the Channel Islands what they are. It's interesting to think of the combinations of very unique factors that led me to this place. I suppose that's what its all about though - taking advantages of the opportunities when they arise, and then making the most of the moment. I did that in the Channel Islands, and I hope to come back some day.
Posted by KG5CCI at 10:00 AM