I dabble in 6 meters, but it's never been a passion like Satellites have for me. Like in the AMSAT world, one of the ultimate goals of a 6 meter op, is getting the 488 grids in the continental US confirmed. In the 6 meter world, this is known as the Fred Fish Memorial Award (FFMA) and there is an entire sub-culture of Ham radio operators dedicated to just this thing. There are rovers that travel to some of those rare grids for 6 meter operations, just like there are on Sats. Therefore, I pay close attention to what's happening in the 6 meter world, cause you never know when you'll have a cross-mode rover somewhere. 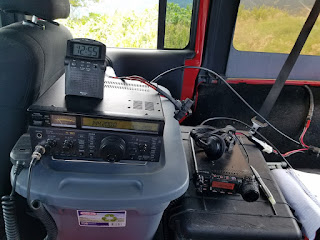 Before this summer, all the 6 meter contacts I've ever made myself have just been for a laugh. I'll make them on the whip in my Jeep while driving thru the country, or I'll take a dipole to a SOTA peak during a big opening, things like that. This spring though I decided to up my game just a smidge, and built a Moxon. I had plenty of wire, and after seeing some 'stressed' leg designs, I figure I could do something out of some spare parts I had lying around the shop. I fired up a Moxon Calculator and went to work. A few hours later the project was finished, and I just needed to wait for the epoxy to dry. The next day I set it up on my push up fiberglass mast, and was pleased to see the calculator was almost spot on, giving me < 1.3:1 from 50mhz to about 51mhz. And then, as promptly as it went up, it came back down again.. waiting for the right time for it to be deployed.. 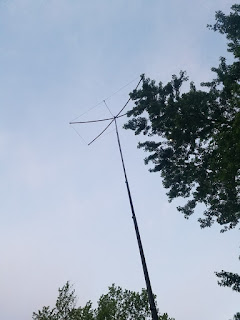 A little while later, just at the start of the Sporadic E season, the mailing list dedicated to the FFMA came to life. There are a handful of chasers that only need 3-4 more grids to complete their 488 list. There are another big group that only need 20-30 more grids. One of the gentlemen that was in that 20-30 category reached out to me, to ask about grid EM43, which is about 90 miles southeast. It's a grid I rove to probably once a year for Satellites, and I'm familiar with the area. This particular request was about 6 meters though, specifically the propagation type known as Meteor Scatter, using a digital mode called MSK144. I've messed around a bit with PSK31, and I'm no stranger to using computers to control my radios, but this was a new thing for me. This new mode required me installed a piece of software known as WSJT-X, and it contained several very interesting weak signal modes. 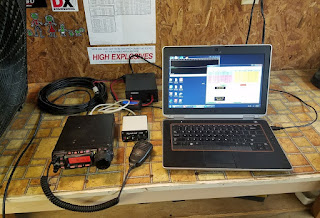 I slowly worked thru getting everything setup, and we set our first schedule on a Saturday afternoon from the house. It took a while (about 45 minutes) to make the QSO, but it was a success! Now I just need to find a time to get to EM43. Soon™ - I promise :) 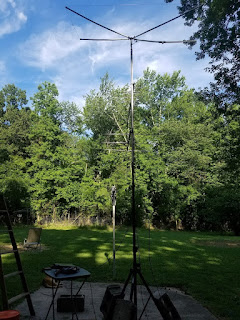 Of course since I had the WSJT-X software now installed, I began exploring the other modes too. I discovered JT65, and was instantly hooked. I could make QSOs, via my remote station, while at work multi-tasking on project? Fantastic! Several very good openings in June netted a good number of QSOs, and as of the date of this blog, I have actually completed 6m VUCC, with a pretty massive help from the WSJT-X software.

6 Meters has been a good time time this summer. I got a new award, and made a fair number of fun new contacts.  My heart in this hobby still belongs to the Satellites, but once in a while, it's fun to take an Adventure to a different band, and see what fun you can have.