After departing ground Zero, we began what was a crazy long day of driving, but we had lots of things to see and do, and a finite amount of time to do it. We headed north back to US380, headed east to Carrizozo and then south on US54 until we got to Alamogordo. It was the 'long way round' but those were the conditions of driving onto the White Sands Missile Range. In Alamogoordo at the suggestion of Gabe, we stopped at the Hi-D-Ho Drive In to get some burgers. 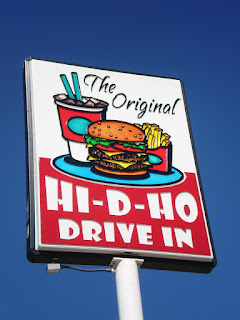 This place, was quite simply awesome. Epic Burgers, every topping known to man, sweet potato fries, drinks and shakes.. This place was the drive in of olden days that you would stop at on Route 66 Traveling the American Southwest. While chowing down on a burger I used the good signal to attempt to work AO-7 from my home station, via remote for some new grids. While zoned out on my table and headphones though, I missed the part where the rest of my crew (we met with some of Gabe's friends there, like 8 people at the table) got up and paid. After my pass was over everyone was ready to hit the road, so we bailed.... it wasn't until 15 miles down the road I realized I didn't pay for my burger. Well that sucks...  So we went back, fessed up to the mistake, and left a massive tip for the waitress. She didn't even realize I had walked out without paying, but said she definitely would have figured it out when she cashed out at the end of the day.

We left the Hi-D-Ho for a second time, and west in search of a clear western Horizon to work SO-50, from the DM62/DM72 Line. NJ7H already had these grids in his rover list, but I didn't... so after making a handful of quick Q's with some west coasters, We got back on the road and headed for El Paso. Now, for those of you who don't know Gabe, he has an obsession with crossing as many international borders as many times as he can. Since we were within, like, 4 hours of Mexico, we had to go there.. the rules of roving demanded it. So, we located a strategic parking lot in the Chamizal Natl. Memorial, and started walking towards the bridge to Juarez. 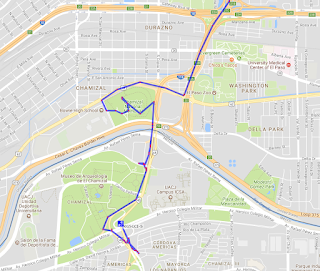 As our APRS tracks indicate, it wasn't exactly a smooth journey. The goal was to find some place to buy some genuine Mexican booze, and then come back...  we wandered around the Chamizal Park for a while, before eventually we found a convenience store, bought as much tequila and rum as we were legally allowed to bring back into the states, hit up a local grocery, bought a bunch of Mexican candy and a plaster Minion (for the kiddo) and headed back to the border. Walking INTO Mexico was a piece of cake, no one even glanced at us... walking back on the other, was a bit trickier. We had to wait at US customs for some time, and explain to the ICE agent why exactly we went to Mexico for 2 hours, then came back. The explanation of booze hunting seemed to be accepted. He did however ask specifically "What was in the Minion" and I promptly turned white thinking of what it looked like carrying a hollowed out plaster toy back from FRIGGING JUAREZ into the United States. My reply of 'God I hope nothing' seemed to satisfy him, and I had to run said minion thru a handy dandy x-ray scanner nearby I'm sure for just such occasions. No contraband was scanned and after a quick duty payment to the Texas State Alcohol Control board and we were safe and sound in 'Merica again.  The goal was to make it into Juarez, score some booze, and get out before dark. This goal was accomplished. Still hungry though, we headed to local hangout 'Chicos Tacos' for one of the strangest, yet tasty, ethnic Mexican dishes I've ever had.While there, of course we did a Satellite pass from the parking lot, and acted like a bunch of giant lids:

After our satisfying dinner and satisfying periscope, we headed into one of the more remote regions of the Lower 48, The TransPecos Texas Panhandle, our destination - Project Gnome:

Along the way we stopped for a Satellite Pass on the DM71/72 Line, which also happened to be on the TX/NM state line. Of course we live periscoped that too... courtesy of Jacket Guy as the camera man.

We made it to Carlsbad after several hours driving thru the desert at night, gassed up and headed thru "Nuclear Alley" to the site of Project Gnome, our next stop on the Atomic AMSAT roadtrip. It was well after midnight at this point, and there were only a few decent passes coming up. But we still operated on a western FO29 and made quite a few contacts. We also posed with a picture at the Ground Zero plaque, this time with an arrow. 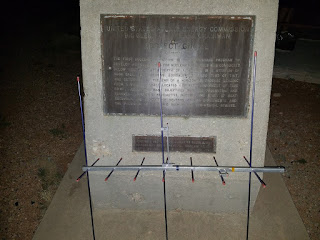 Even though there was basically nothing around, I would have liked that have spent more time in extreme Southeast New Mexico. The Waste Isolation Pilot Plant was just a few miles from where we were - and taking some pictures of the sign near it would have been a welcome stop on the Atomic Roadtrip. The National Enrichment Facility, where the industry enriches uranium for power plant use, and Waste Control Specialists where low level Nuclear Waste is stored are also within 30 minutes drive of Gnome. It's really becoming the region where the US goes to dabble in Nuclear Technology, and is a fascinating place.

After a fun time at Gnome, we headed east again. With no more stops on the road trip planned, we drove until we couldn't drive any more, found a nice oil derrick off the side of the road, and crashed for a few hours in the car. We were woken up by a strange noise a few hours later, rain! A rare thing in this part of the country indeed. We got back on the road, and winded our way thru west Texas, up to Wichita Falls for lunch, and back to OKC mid-afternoon. We posed for one final picture with our collected booty for the camera, and went our separate ways. The Atomic AMSAT Road Trip, was in the books. 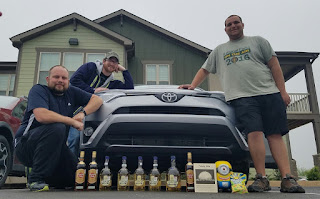