So, in my last article talking about 6 meters, I mentioned EM43 and the desire for it to get activated. Well, since then I've done just that - twice now actually. So let me tell you my tale, first though, a quick precursor on grid chasing in the land of Six. 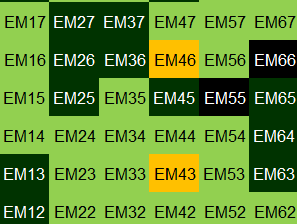 In my little part of the world, grids on Six are not that uncommon. Unlike Satellites, there are a LOT of people that do Six, and anyone with a dipole and 100W during Sporadic E season can make contacts pretty fast. There are also several contests each year where Six is a big part of the score, and rovers specially build themselves to cover lots of ground and make as many contacts as they can on VHF bands that include 6 meters. None of this stuff happens on Satellites. So as a general rule, if people live somewhere, there are usually at least some sort of active Six operators there. Well, that takes me to EM43. This grid is primarily in the River Delta area of Arkansas and Mississippi. There are not a whole lot of people out there, and it's not a particularly well to do region financially. That said it is beautiful in its own way, and has some of the best southern cooking you'll find.. so I enjoy trips there when the opportunity arises. EM43 also happens to be one of the only 2 grids near me that greater than 25% of the 'FFMA Leaders' need in their chase. Switch gears back to Satellites real quick, and the state of Mississippi is one of the rarest on the birds. It is often on people's "last to work" list for WAS, so I make it a point to go portable down there with an arrow at least a few times a year. With these two things in mind, a mission was cooked up to activate EM43 on Six, and activate the state of Mississippi on the birds. A date was chosen, and we were off.

Part I - The Perseids

I got up at 4AM on August 12th and headed southeast. It was going to be just shy of a 2 hour drive, and I wanted to be onsite an operating by 6AM. I had packed all my gear the night before, so I stumbled to the Mustang, turned on APRS, and hit the road. About an hour down the road I exited the pine forests and hit the true delta country - while there was some fog, the drive was mostly easy going. K9CT was emailing about every 15 minutes watching my progress, especially once I crossed into EM43 waiting for me to setup. I crossed the Mississippi river at the Greenville crossing, found my spot, and got the Moxon up in the air. 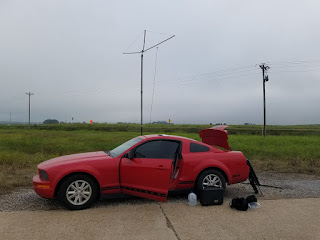 As soon as I turned on the radio I could hear the telltale sounds of MSK144, and I figured K9CT was already calling me. As I got WSJT-X booted, sure enough he was there, and I quickly answered him. At this point, Problem 1 reared it's ugly head. The sounds came back after my first call, and I could tell I should be decoding them, yet nothing was happening on my screen... I noticed my fast waterfall display wasn't moving.. the wsjtx program was working, but it wasn't decoding clearly audible signal. I rebooted the program after 2 or 3 sequences where nothing was happening, and it promptly decoded Craig's R-01 report. I started sending my RRR, but after 2 or 3 sequences, noticed the waterfall stopped moving again. I rebooted the program, again, and as it came up I got his 73 message. So, QSO complete. Yay.. first new one handed out. Meanwhile though, WSJT-X was freaking out, and I didn't know why. This problem continued the entire morning and I never did fully solve it.. let me tell you, restarting the program every couple sequences got real old. 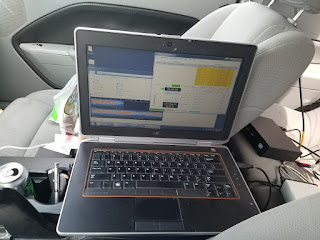 Despite the software problems, I was making QSOs, so I kept at it. Problem 2 occurred after working N8OC I got back out to spin the Moxon around to the south, and as I doing so something went 'snap' above my head, and I looked up to see my Moxon wire hanging loose on the back right corner.. not good. I promptly too it down and started looking it over. The wire had snapped right on the corner where the stress support connects. I seriously considered calling it a day, but figured I'd see what I could do. I had thrown in a small butane torch, a roll of solder, and my coax crimpers, to compliment my normal road-trip tool bag and lifetime supply of duct tape I carry everywhere, so I got busy... after 5 minutes of some very crude repair work I got the wire back together, and duct taped it to the mast. It wouldn't survive being taken apart again, but I just needed it work for another couple hours.... and it did. Every QSO I made after 1200z, was made on a busted, field patched antenna held together with globs of solder and 12 foot of duct tape. Moral of this story - ALWAYS bring tools with you to the field. 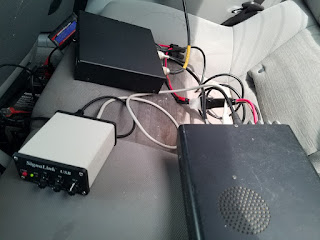 After Murphy was beaten down twice, things started getting better. The rocks were falling, and the pings were coming. I was fighting some weird noise at 50.283, but a QSY to 50.263 solved most of those issues. Pingjockey worked well as a place to announce my spots, and folks did a good job adjusting as I had to. While running several skeds with people, I activated auto-seq and got out to work some AMSAT, making 38 QSOs on 4 passes on the birds, so it really was a multi-mode rove with lots of happy chasers all around. Along with my 8 QSOs I made on the meteors, I wasn't unhappy for my trial attempt at 6m roving, but it left me wanting more.Oh yea, I of course did some live periscope too.


Part II: Upgrades, and a Retry

I was hooked - but before a re-attempt, I needed an upgrade. The homemade moxon and PVC mast on a speaker stand tripod worked, but it didn't work well. The flimsiness of everything, un-optimized runs of coax, and of course the lack of gain needed to be dealt with. So, first order of business was a proper beam. Thru some wheeling and dealing I managed to score an MFJ-1762 for next to nothing. I acquired some military surplus 'Camo Netting Supports' which are 4' long aluminum interlocking mast sections that easily will support a small beam at anywhere from 16'-24' feet, but are small enough to fit in the mustang. I got some scrap iron together and had a Ham buddy weld me up a 'drive over, tilt down' base that also fit in the Stang's trunk, but still be a nice solid place to put my mast. Finally I measured out a run of LMR400uf that would run to the new antenna on my portable mast and be just right to fit back inside the car so the RF was only going the distance required, and no more, thru some quality coax. I tested everything out at home, and it was working good - so I picked another date to try again. October 14th, 2017 at 4AM I was on the road again. 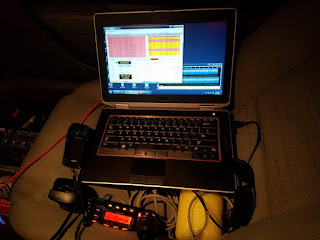 I didn't have to travel quite as far this time, as activating Mississippi wasn't the goal, just the EM43 grid. So I stopped in EM43FV in the town of Mitchelleville, AR where there is a large grain elevator, with a huge gravel parking lot for the rice trucks to park and wait. Luckily it wasn't rice season, so the parking lot was completely clear, and provided a nice spot to park and operate. It took about 10 minutes to get the base/beam/mast fully assembled and up 20' in the air, which was a little bit longer than the Moxon, but it paid off big. I immediately was hearing much bigger signals that I had with the Moxon, and the contacts were coming much faster. 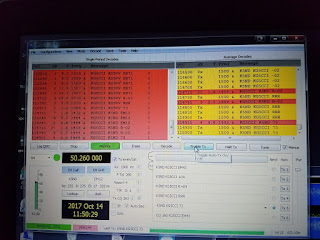 The cooler morning was working better too, as the rig was staying chill, and the laptop was running fine. I was making contacts with people that were further away, and making contacts with people running smaller stations. For example, I picked up Jim K5ND over in EM12 my 3 Elements and 100W to his Moxon and 100W in about 13 minutes - which is pretty fantastic considering the size of our stations. While running rocks, I also did setup the Sat station and work a few passes, considering there's always new folks on the birds. 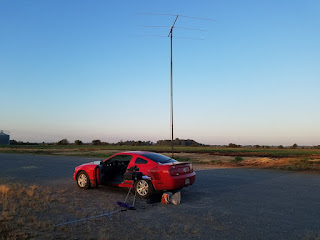 I operated for a few hours, made 17 contacts and decided to call it a day. My improved setup had done everything I'd hoped it would, and I was happy with its performance, based on what I'd invested in it. Obviously a bigger beam and more power would yield more contacts faster, but that's down the road. What matters now, is I think I've become a somewhat successful 6m rover. And that's definitely another tool in my Ham belt.
Posted by KG5CCI at 9:35 PM