My New World and my new Approach to hamming

I know I've said this before, at least 3 times, but I'm going to try and pick the blogging back up. There's too many good stories and interesting information I need to share and document for posterity sakes. So without further ado, here's my "I'm going to blog more, blog" and I'm going to try and explain what happened, what situation I'm currently in, how that has impacted the things I do in the hobby, and I where I plan to take the hobby.

First, here's the history of the past 12 months. Many of you know at the end of 2017 I finished Graduate School. I actually wrote my master's thesis on a ham topic, which was a ton of fun. School was an interesting thing for me, I already had a good job with a good salary that I mostly enjoyed, but never one to sit on my haunches I wanted more. I was also being challenged by my fabulous wife, as she was going back to school as well seeking an MS in her respective field. On of the great things about being in the computer network field is that many of the better jobs allow you to work remotely from your home. This was always the number 1 goal for me, not necessarily making more money in my career, but having the flexibility to live wherever I wanted. My job in 2018 gave me a lot of flexibility, but I still did have an office I needed to go to sometimes. I wanted to find one of those gigs where the only office I had to go, was somewhere on my own property. Plus, to put a ham spin on this, a nice acreage or ranch out in the middle of nowhere is going to have much lower noise floor than one of the megapolis' that exist in our country today. Also, I'm a country boy, I want to get back to my roots and raise the kiddo in the same way I was if at all possible. My wife, being in the medical field though, wasn't quite so flexible. She still needs a brick and mortar place to conduct her practice. When we started down this 'Get Smarter, Acquire Stuff'' road 4-5 years ago, we knew at the end of it, there would likely be a move involved. We didn't quite know where, or when, but it was a bridge we knew we'd have to cross. 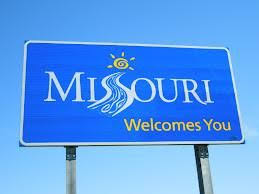 Doni finished her school in the summer of 2018 and began the hunt. After a lot of resumes, and a few heartbreaks, she found her job in Joplin, Missouri. Negotiations were settled, and she would begin in January of 2019. This means the foreshadowed move had finally arrived. Ironically, I had been approached by a company shortly after completing my school as well, who had offered me a different gig with better pay, cooler technology, and importantly - the ability to work from home. We had gone back and forth on when I would start this new position, and about the time Doni finalized her negotiations, I finalized mine. This means in a 60 day period, we were both going to be starting new jobs, moving to a new city, and selling the house we'd called a home for the past 9 years. Things got a little hectic, as you can imagine.

Skipping over a bunch of boring details unrelated to radio, here we are 8 months later. The EM34 house is sold, and the whole KG5CCI family is in EM27 and doing great. When we made the move the deal was we'd get a rental house for a year or so and make sure we liked the area, liked our jobs, and were sure this was the place to put down roots. We're about 3/4 thru this evaluation period, and things are looking pretty good to stay. Now, this current reality of a temporary domicile means I have little to no place to setup an antenna, and even when I've used my rover mast in the driveway, I can't hear much cause of all the city noise. I can sort of do satellites from the driveway, or my postage stamp backyard - but it's a far cry from my low noise horizon in EM34. Interestingly, I *do* have a much better vantage to the north here in EM27, and I've already worked KL7 a number of times from that postage stamp backyard without much effort at all. 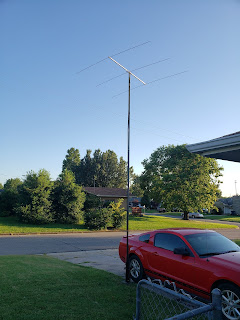 I did luck out a bit though, and our rental house has a great little building in the backyard, that I believe must have been a wood-working shop at some point. It's well equipped with HVAC systems, insulation, and more power outlets than any person who isn't a ham or a wood worker needs. Having a good shop to tinker with things has really made living in the city bearable for me.

The short version is everything is on schedule for us. This fall after a few financial things happen, we'll start looking for property in the country around Joplin. The only real requirements that we're after is we want at least 20 acres, we need good internet, and we absolutely positively must be able to see the horizon in all directions with a modest tower. From preliminary research, I think this can be done fairly easily. I'm not totally sure I want to immediately become a shack sloth, and never leave the Air Conditioned comfort, but I know at some point in the next 30 years when I start slowing down a bit I'm going to want a kickass home station. A 50' long beam on top of a nice tower, out in the country on a hill in Ozarks is gonna be pretty tough to beat. That's the goal anyway. 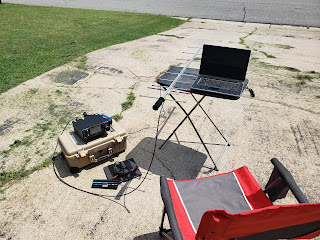 All this though is still in the future, for now you can still find me on the air time to time portable from somewhere. I've got rover bug and there is no cure - if you've been watching this summer you've already heard me from far west barren 7 land grids, and far away places like KL7 and VY0. Do not expect this to change anytime soon. I'm just barely a teenager in ham years, and plan to keep running until I can't anymore. 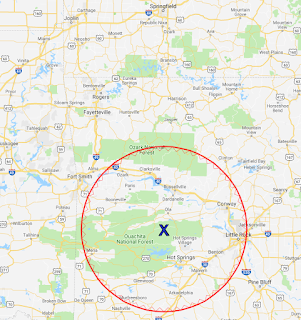 One really interesting issue with moving to a new location, is all of my previous VUCC chasing credit remained in Arkansas. The 200KM circle I used to use that would cover EM34 and EM24 are now well to the south. This means everything resets with regards to my chasing, and I start over. I *do* get to keep my DXCC credit, but that's a pretty small consolation for a VHF+ operator. In another way though it is liberating. I completed the 488 Sat chase from EM34, and now it doesn't matter... I can never add to that total again, unless we move back south (which probably won't happen). Everything I do from here, I do cause I want too - not because it's something I need to do to keep up with some silly numbers on a map. I have been freed in a way not all hams get to experience, and I plan to make the most of it.

Well, it's not that big of a secret where I plan to take things. I like Satellites, but I'm not obsessed with them like I used to be. I really enjoy Meteor Scatter, and plan to start investing more time and money into EME. I've also got some really killer expeditions I'm working on for next summer, including a return to a place I've been before, but this time with gear that's bigger and better. 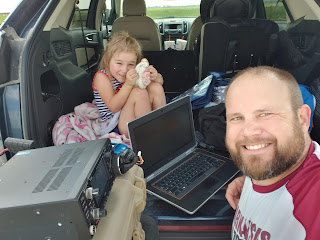 Finally, I've got a kiddo that's getting older every minute of the day, and enjoys accompanying her weird dad on adventures with radio. She's been present for 2/3rd of my EME contacts from EM27, and even though we have to turn her DVD player off when we're on 70cm, she still wants to come with. Expect a whole lot more family style operations in the future, and maybe a new voice on the mic in the next few years.