This is an old blog I never quite finished, but I think it's important more than ever with folks going to automatic doppler control, and wanting to use remote stations in Satellites. Therefore I've decided to put some polish on it and get it published in the hopes it may help someone else down the line.

There's a lot of satellite tracking and frequency adjustment programs out there, but I think SatPC32 is probably the best. When you're first getting it going you will need to calibrate it a bit to work with your radio. To do this, find a quiet spot in the passband on the bird and go into the Accuracy menu and mess with your uplink until you get it tuned just right. Once it's on, you shouldn't have to mess with it anymore assuming some other factor doesn't change. Other factors might include the things I'm going to talk about later, but this is where you'll keep coming back to to get your adjustments right. Learn this. 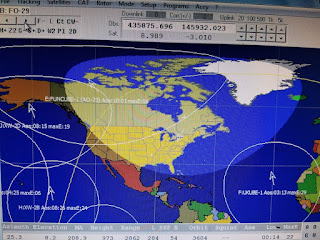 I already talked about the importance of up to date Keps in my blog HERE which should definitely read if you haven't. But knowing where the bird is in relation to you is how programs like SatPC32 to adjust your frequency for you. In addition to accurate Keps, you need to keep a very accurate clock on your PC. There are a ton of different ways to do this, which you can read about in some of my other blogs, but automatic doppler and digital modes both relay on your computer clock being accurate. Also consider when your keps get updated, you might need to go tweak with your SatPC32 calibration. It's usually not much, but any change in the factors might require a recheck. I wouldn't update your keps right before you're going to chase someone with a 30 second window at your AOS. Update and Calibrate on nice long passes where you've got plenty of time.

When using a rig in the field, you're exposing it to all sorts of different kinds of environments. Hot, Cold, Wind, moisture, you name it. This is a big reason why I stress manual doppler correction in the field, each of these factors messes with things like the cpu clock in your computer, or the stability of the oscillator in your radio. Adjusting by ear is using the CPU in your noggin to adapt. However at home when having a computer do it, you need to keep these factors absolutely minimized. Keep your computer and rig in a normally controlled temperature (65F-78F is usually recommended) and keep it away from direct sun, sources of moisture or abnormal air currents. Now that's not to say cooling isn't a good idea, cause it is. Keep good ventilation to your rig so it can cool itself off. You don't need a fan blowing right on it (unless you're doing jt65 on your 857 for hours like I used too) but having the air around it moving is a good idea.

This one is optional, but useful for Sats, and *really* useful for things like Meteor Scatter and EME. In my 821h I upgraded to the CR-293 high stability reference crystal for the Local Oscillator. I'm not positive my original crystal was causing the problems, but the upgrade was fairly inexpensive (~$90 on ebay) and I had heard from other Icom users that it made a world of difference.

Here's the new crystal and the old one (after removal) 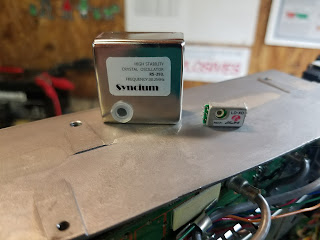 Where it goes inside the guts of the radio. Big Dashed Square is for the CR-293, small square is the original factory crystal. 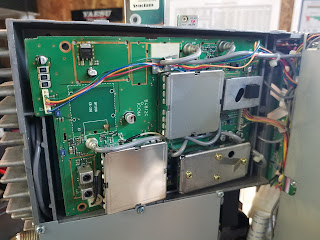 After using it for 2 more years with the upgraded crystal I never noticed a difference, but other users told me they did. I considered this to be a good, although maybe not critical investment.

The final change that got me over the hump to solving all the stability issues came down to one simple, but crazy important thing I neglected to consider. If you'll remember at this point in my ham experimentation career I still relied on batteries to do everything. I had several 70ah banks of 12v slabs that powered things in my shop. I would use some of the higher performance lifepo4 Zippy's for portable work, but everything was still charged and discharged thru chemical means before being turned into RF. One day I was testing output on my rigs and noticed I never could get full power out on the higher watt settings on the higher frequencies. The Zippy was better, but still lagged a bit. This came down to voltage under load - which is a simple concept. The more power you're pulling from a battery, the ability it has to push that power drops, ie voltage. Logic follows then, for electrically powered clocking type things (like a cpu or an oscillator) voltage variations will change the rate at which they clock. In the perennial words of Gru - "LIGHT BULB". 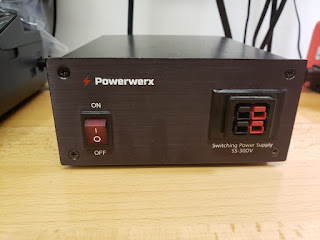 I finally gave in and got a power supply. I didn't opt for anything huge, just a 30A 13.8V constant supply from Powerwerx. Based on the specs on my radios I figured this would be sufficient to get full voltage even under load, and it was. I went from being 500hz low every time FO29 came over, to be spot on every pass. And while it did put out a little bit of noise, it was nothing that a few ferrites couldn't fix for me.  I had finally figured out the key to having good stability on a home automated satellite station and it was as simple as good power in, good power out.

If you're just considering an automatic station for the first time, I would recommend in this order things you need to do to keep your doppler correction on point.

Do this, and you should be good to go. Good luck in your own battles with stability, once you're won, the spoils of victory will be yours.
Posted by KG5CCI at 12:33 PM