So here's the blog I've really been meaning to do for a while. It only should barely be called a 'blog' since this is more of a cross between a sales pitch and a menu, but here we go.

Yes - I build custom coax jumpers to use with your Satellite setup. 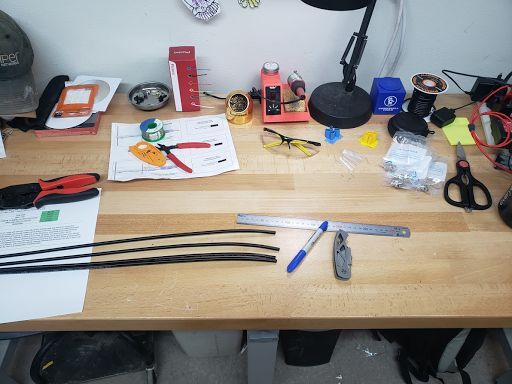 OK, so now that that's out of the way, let's get into the nitty gritty. First, when I say custom - I really do mean custom. I keep a small supply of coax and connectors around for the more common builds I do, but as a rule I order everything is made from scratch when you tell me you want them. What do I build your jumpers out of? Great Question!
The only coax cable I use is genuine Times Microwave LMR. I've tried messing with other stuff, and it just isn't as consistent or as reliable. Times Microwave is expensive stuff, but it's worth it in my opinion. Normally for portable jumpers meant to be used with an Arrow or an Elk antenna I recommend (and 99% of my customer choose) Times LMR240 Ultraflex. It seems to be the perfect balance of very low loss, yet lightweight, rugged, and easy to work with. I do once in a while do a full LMR240 (not ultraflex) build for someone wanting a more permanent jumper, or for someone wanted to squeeze that last half a db out of their assembly. It's really just a preference thing for you. I do also once in a while make some LMR400 and LMR400uf assemblies for non-satellite uses, or for fixed Satellite or EME installations. Basically if you're needing a custom coax assembly made with low loss stuff, I can build it. I don't work with LMR600 or Hardline at the moment, as it's just too heavy and too expensive to send thru the mail.

For connectors, I pretty well only use Amphenol RF. Once again, expensive, but they're the best. BNCs, N Connectors, PL259, pretty well covers them. Most have a male or female plug or jack option, some of them (like BNC and N) I can do right angle connectors too - which can be handy for certain types of antennae like the Elk Common port.

Other random details, I use crimp shield connectors and crimp+solder center pins. Get around that argument by simply doing both. It makes a solid connection that gets even more solid when I put double wall marine grade and glue lined heat shrink tube over the crimp connector. That locks everything in place well so there's very little movement and good strength at the weak point in a coax assembly. Finally, I personalize each cable with the operator's callsign on a color label that also specifies the purpose of the cable. Normally I do a blue shrink tube and a blue label for a cable for the 2m side of an antenna, a yellow label and shrink tube for 70cm side, and red for 23cm. I've also got green, white, silver, and clear labels and shrink tube to use for different purposes.

So now for some common builds. As of January 2022 the number 1 package I'm sending to operators is for the IC-9700, which is not surprising considering it's the only purpose built Satellite rig on the market right now. 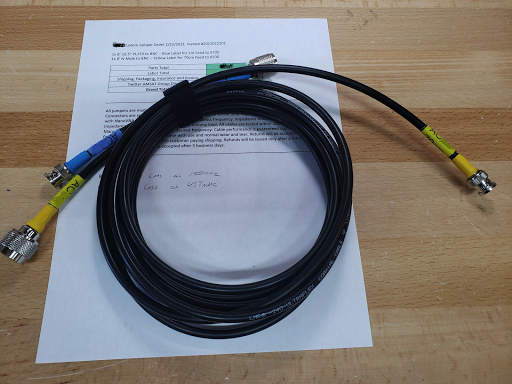 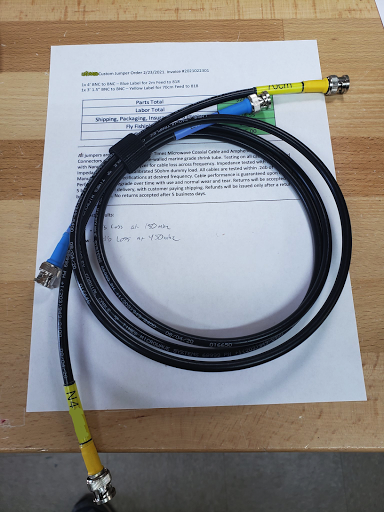 2x LMR240uf Jumpers, BNC to BNC on both, Shipped anywhere in Lower 48:

Next are just some example of different builds I've made for HT users, both with duplexers and without... They're not very common, so just message me for a quote - but hopefully it gives you an idea of things I've done and can do:

2 HT's mounted on a Boom Extension for an Arrow 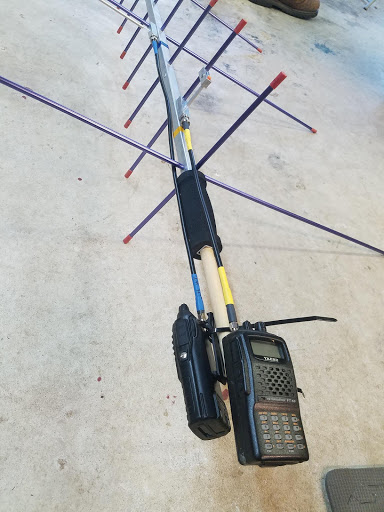 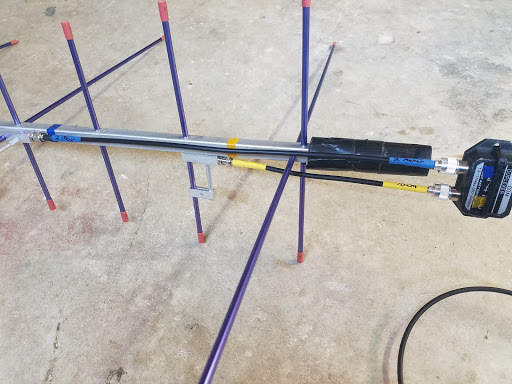 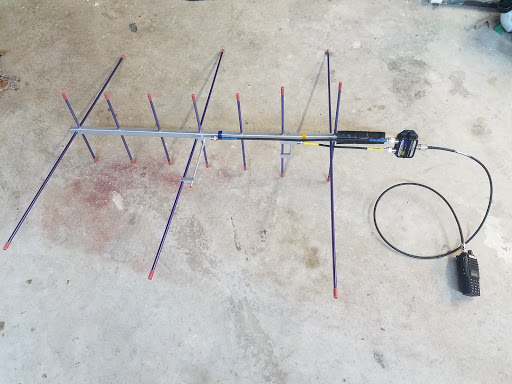 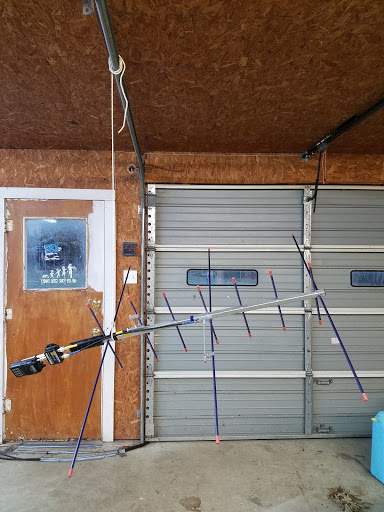 HT Mounted on Boom with Cables and Hand Mic 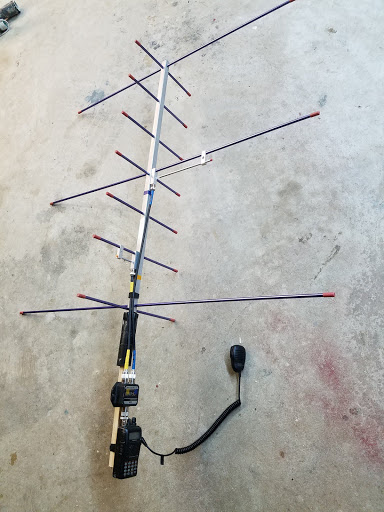 Anyway, hopefully that gives you the idea. If you've got something different than this in mind, shoot me a DM on Twitter or drop me an email and we'll talk.
As far as 'how to buy' just reach out to me, we'll talk your build over and I'll give you a quote. If the quote is good, give me your email address (preferably one associated with Paypal) and your current address and I'll get to work. I don't ask for a deposit or payment upfront, so far I've never been stiffed by a member of the community. If you give me your word you want it, I'll build it.
Once the build is done I'll send you pictures of the completed package and an invoice thru Paypal (Don't worry, it's one flat cost to you that includes everything). Pay thru paypal, I'll get a message and then get it shipped out. I've used several versions of shipping over the years, but anymore I just go with USPS Priority Mail. That way I don't have to make special trips to shipping offices, the cost isn't prohibitive, and it normally makes it to the destination in a few days. Using Paypal also gets us both seller and buyer protection as well as discounted shipping. It's just easy that way.
So that's it! Custom jumpers, built to order, by a Satellite Operator, for a Satellite operator. I never meant for this to become a business, it kinda just happened. I wasn't happy with what I could find on the market, so I bought all the tools and started doing it myself, and now I share my equipment and experience building with the community. If you're interested, hit me up on Twitter, or shoot me an email at dave@druidnetworks.com and let's talk.
Posted by KG5CCI at 11:07 AM