So for too long (a few months) the center of the country on my 6m map looked like this: 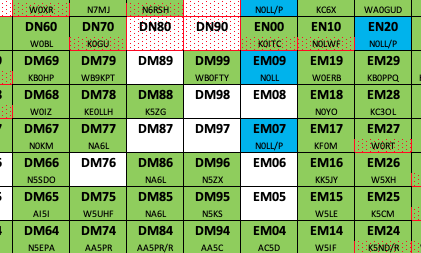 I had managed to work all the grids around the high plains of Kansas, but had only rarely found operators in those great wheat fields to work. Once in a while a rover like NA6L or N0LL would roll thru and I'd pick one up a grid or two, but still there was a big gap. My buddy Wyatt (AC0RA) had the same dilemma a year ago with his map, so he setup his home station to be remote-controlled by some other operators, packed up the rover and headed to the high plains. In the course of a few days he managed to work 'himself' with EN41 local hams running the AC0RA station and Wyatt running the AC0RA/R Rover in all the grids he needed, in very similar style to how the K0D rove went down. I managed to miss Wyatt's rove because I was living in EM27 at the time, and had given up temporarily on chasing 6m grids. Now that I'm back in EM36, and in my 200km circle with the old EM34 QTH, chasing counts again. I've also made some improvements to the home station (which I'll document in later blogs) and so I've become a fairly effective 6m scatter chaser.

Anyhoo, since moving to EM36 I've done quite a bit of radio at home, but I haven't had a good rove other than a day trip down to EM43 with Matt and Wyatt last summer. I've had a plan to go grind out those Kansas grids for a while now, and finally in March a confluence of events came together in such a way I was able to make it happen. The plan would be to operate as KG5CCI/P and have Matt (NJ4Y) and Wyatt operate the KG5CCI station via remote control to pick up the grids from home. I would drive the mustang solo west to the EM05/EM06 line in Oklahoma, work myself on either MSK144 or the new amazing wonderfully powerfully </sarc> Q65 mode then head west near DM76 and spend the night. Get up early the next day and hit DM76 really early on scatter, then move up to DM87 and sit there for a while, also on scatter, since it was a top 50 most needed grid for the FFMA chasers. Then as the day would wear on I'd slowly work my way back east hitting DM97, DM98, and EM08 then spend the night in EM17 (Wichita) before getting up early the next day and blasting back home to EM36. Basically, it looked something like this:

From a gear perspective I'd take the mustang - because of superior speed and miles per gallon efficiency. I'd also take my finely honed mustang portable kit of my drive on mast support, a 30' spider-beam aluminum push up mast, my 3 element MFJ1762 6m beam, about 40' of LMR400, my super trusty FT857d, and the assorted sound and computer accessories to make WSJTX work. I also threw in the 100ah LiFePo4 Bioenno Power battery so I would be sucking amps off the mustang's battery. After buying the battery last year in preparation for a second CM93 trip I hadn't really put it to a solid test yet, and wanted to really push it. The Home station would the 7300 into a modified Larcan running about 1200w going to my 5 element LFA up about 45' on the tower trailer parked next to my shop. More on that later too...

From here there's not much to say other than things went off without a hitch. I took some periscope from the stops:

After hitting EM05 and EM06 in separate stops (I couldn't get to the line cause of lots of recent rain) I continued west to Capulin, NM and spent the night in a Super 8 - which interestingly enough was the first time I'd been in a hotel since the beginning of the pandemic. Next morning I got up early and managed to operate from the DM76/DM86 line, even though it wasn't my intention:

After my super early start I migrated up to DM87, got on the air quickly, and took the shot that defined the speed rove: 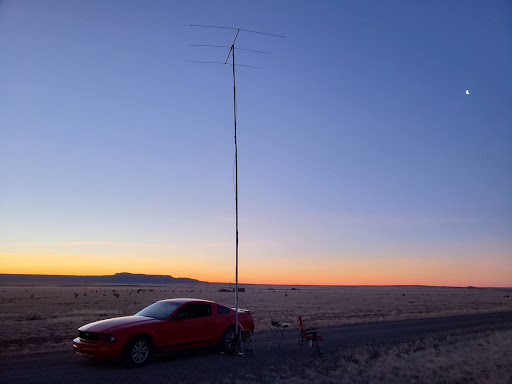 Pre sunrise, a quiet road in southeast Colorado, the moon in the background, and the antenna banging away at the meteors flying in the sky. Anyway, more periscope from the next stop DM97 a few hours later into the morning once I was back in Kansas:

Then I finally moved up to EM08/DM98 line, worked a few more, and headed to Wichita to crash for the night. Final results, for about 8 hours on the air, 8 grids activated, 78 QSOs made, and 37 unique stations worked. Not bad for a weekend drive in early March. I also managed to get DM87 knocked down from top 20% of FFMA chasers needing it to 10% in my little activation, which is probably the most rewarding part of roving.

I had a bunch of chasers donate some cash to help cover food, fuel and lodging expenses for the trip - which was a giant boon. It feels really good to know folks have my back when I'm out in the middle of nowhere. And oh yea, my map? Now looks like this: 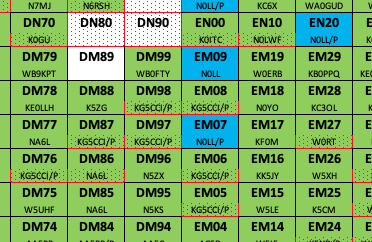 Still got that gap up in the far northwest corner of Kansas, and further up into Nebraska, but at least the southern part of the plains is cleaned up on my map. Need to find another 30 or 40 this summer during E-Skip season and that should put me on the leaderboard.
Good times :)
Posted by KG5CCI at 7:00 AM