Saturday morning started early... even earlier than I had planned. I was on the road from Mena at 1030UTC, and my destination was Polecat Peak (W5O/OU-003). After a grueling 2 hours drive, over some very gnarly forest service roads, I arrived at the foot of the mountain. 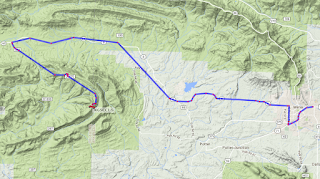 I promptly scurried the 100 or so yards thru the brush to the top, got the 40m dipole up, threw out a spot, called CQ... and nothing.... hmm... that's not good.. I spun the dial a bit, didn't hear much, finally came across some people lower in the band. I think I was too early for everyone to be awake. It was 730AM CDT on a saturday morning, everyone must have been sleeping in. After a few minutes of calling CQ, I finally picked up AC7P, and that was it. Worried about getting my 4, I switched to 20m... it was still pretty dead too.. I did manage to scare up 3 more QSOs though after another 15 minutes calling.. phew... Packed up and jumped back in the jeep, headed to the next one. 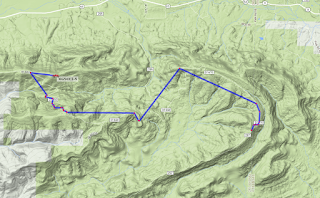 Next stop was Lynn Mountain (W5O/OU-001) which unfortunately was back down the horrendous road I had just driven up, across the 50 yards of decent road, and then straight back up a different nasty rock road to approach from the West. I made it to the top after some time, and found a pull-off near the high point. While I was unloading the Jeep I heard XE2JS calling CQ on 50.125, so I promptly answered him and picked up another 6m contact on the mobile, woohoo! After setting up, I made 4 quick 40m qsos, and 8 20m qsos, and headed back to the jeep.. and ran into a minor snag as the right rear tire was obviously low on air. A quick check found a small hole, luckily I keep a full plug kit and air compressor in the back when I'm off-roading, so 20 minutes later I was aired back up, and on the trail towards Pigeon Benchmark.

Pigeon Benchmark (W5O/OU-013) was my first real hike of the morning. It's about 1.5 miles from the road, so it required slightly more than just brief bushwhacking close to the road. There was a decent trail though, and it wasn't a whole lot of up and down, so even with the big pack, it was a fairly enjoyable out to the high point. Once there I setup just my 20m dipole (since I was having better luck with it this morning) and proceeded to call CQ. By this point in the day there were several other activators out there, so I managed one quick S2S, and then told the pile where I was going so I didn't have to put my own spot out. 20 minutes later I had 17 QSOs, and paused for a quick selfie.. cause why not.. 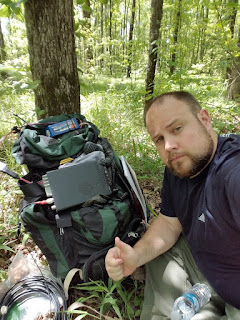 I wrapped up the activation and hiked back to the Jeep. 30 minutes later I was back on the road, heading west. I knew the road would continue until I crossed highway 259, where I'd have a quick pavement break, and then begin the climb up the infamous 'K-Trail' to the top of Kiamchi mountain.

The 4x4 trail is 11 miles from start to finish. The first 7 or so is pretty typical for a forest service road in this part of the country, and most normal high clearance vehicles will do ok. Mile 7 thru 9.5 get rougher, but any SUV or truck should still be OK. The last 1.5 to the top is where things get sketchy. Most folks actually park here and hike the rest of the way... but with the Jeep? Hah! Forward! Several rock crawl sections, and at least 4 very long and deep mudpits still full of water later, I was up on top, and cruised the rest of the way to the summit. 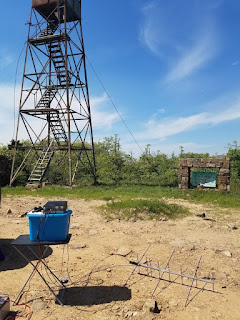 Up until this point, I hadn't actually worked any Satellites on my trip. I was hoping Kiamchi (W5O/KI-001) would have a good view to the horizon in all directions, and I was coming up on AOS time for an SO-50 pass. Unfortunately there were little scrub trees that obscured the bottom few degrees of the horizon, but it still wasn't bad. I walked the requisite distance from the Jeep and setup my station, making sure to be using battery power and a completely self contained station to meet SOTA rules. SO50 popped into view and I quickly cranked out 8 QSOs in about 10 minutes, finishing off with K4T - in the Dry Tortugas.

There IS a fire tower on top of Kiamchi as well, but there was not enough room to operate from it, with missing (and in some case rotting) boards and steps. I went up most of the way and promptly decided it would not be safe to hang out in.. I did grab a quick video while I was up there though.


I knew Kiamchi would be the apex of my adventure, as everything else I had on my plan was accessible from much better roads, so it was good to be at this point. It was 3pm local, and I still had about 5 hours of daylight left, so I decided to buzz one mountain range north and try and get a few more of the 'easier' summits over there. I headed back down the 'K-Trail' - aired my tires back up at the highway, and jogged north thru the valley to the 'Winding Stair' mountain range. Once on top, I headed west for the unnamed Point 2290 (W5O/OU-006). 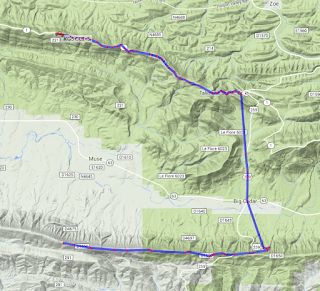 Even though I felt pretty good, the Adrenaline of the day, and the fact I had started nearly 11 hours before was starting to wear on me. I got to the pull-off for 2290, and the wind was absolutely HOWLING now, as I think a front must have come thru during the drive. Instead of the dipole, I grabbed my tripod, tossed up a 20m hamstick, put out a few radials, and started calling to see who I could raise. I was back in cell phone reception land again, so a quick spot netted me 8 contacts without a whole lot of effort. Content with the activation, I buzzed west to 'Sycamore Lookout' (W5O/OU-005). I was approaching exhaustion, so I check my Satellite tracker and saw there was an AO-85 pass coming up in about 20 minutes. I got on the site, setup my satellite gear, and had about 10 minutes before AOS. While hanging out I figured I'd blindly call CQ on 146.520 and see who I could find. To my surprise I managed two quick contacts from a husband and wife ham team only about 20 miles away. Awesome! This turned out to be a very good thing, cause once AO-85 came over, I only managed 3 QSOs on the bird... had I not has those simplex contacts, I wouldn't have had enough for the activation.

Since I was so far west, I drove down the mountain into the town of Talihina, OK for a snack before the trip back to Mena. On the way I passed the zero mile marker of the Ouachita trail in Talimena state park. 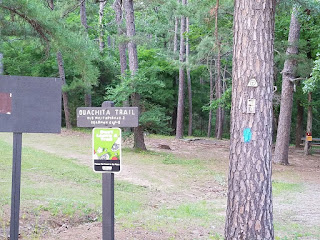 I thought this was a fitting end to the day, so I paid my respects to the trail, and headed back east for the night. Satisfied with my day.