On May 14th, 2016 the annual Arkansas QSO Party was held. I missed last year due to prior commitments, so I made it a point to go out this year. I got everything packed in the jeep the night before and surprisingly was able to bring darn near everything with. 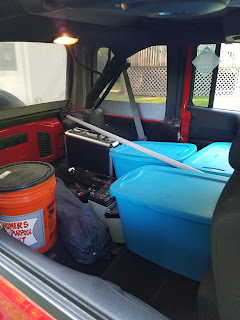 My destination was a spot known as 'Crystal Mountain' which was within 3 miles of the Saline / Perry county lines, which per the QSO party rules, counted a 'county line' operation.

The weather was a little iffy looking at the day started, a big cloud bank moved across the sky.. but the temperature was nice, the view was great, and the rain managed to hold off. 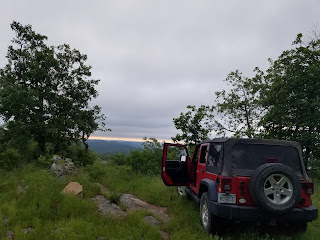 I put my 40m dipole up first and called CQ for a while. The bands were not in great shape though, and with my 50W I only netted about 10 qsos in the first hour. 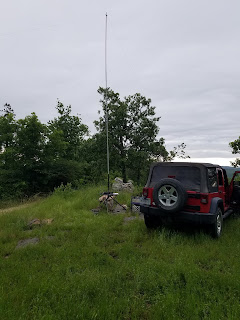 My mighty shack did OK though, and any day in the mountains is better than any other day somewhere else. 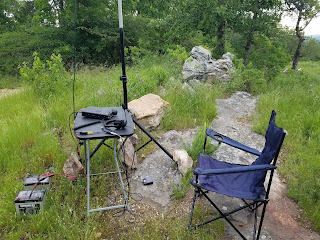 After a couple hours of HF, I got my Satellite station out. UT1FG/MM was sailing on the high seas in the Gulf of Mexico, and my view to the Southeast was second to none. Worked him easily, and actually caught N4UFO/P towards the end of the pass in some rare grids in Nevada too... score! 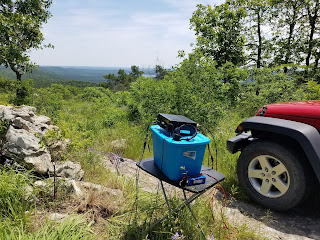 After the Satellite pass I decided to try a little /P psk31. I'd never actually done this before, but I had the equipment, and I figured 'why not'. This was actually the most fun I had. I made 17 QSOs, including some other QSO partiers, using 10W and my dipole. You can hear everything out in the mountains, so it was easy for the computer to pick out the faintest of signals. 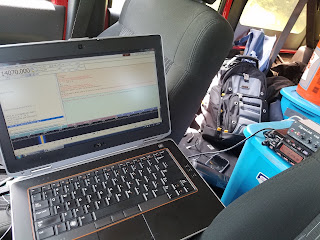 Finally as the day wore on, I relocated to the other side of the mountain, shimmied up a little cliff, and setup my station hoping to catch Alaska on SO-50. I didn't hear them, but I did work a few others other out on the west coast, which is always a good time. 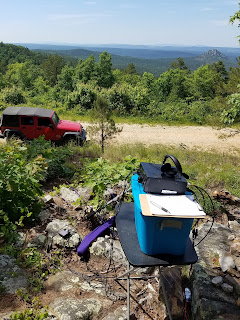 Overall, a great day in the mountains with radio.
Posted by KG5CCI at 9:33 AM