Sunday morning didn't start quite as early as Saturday had.. I had gotten 6 of the 10 peaks that were my goal for the weekend (not including Friday) so I was already ahead of schedule. That said, some family was going to drive out and meet me in the mountains for a late lunch picnic, so I had to pretty well wrapped up by midday. I departed Mena and headed for Winding Stair Mountain (W5O/OU-002) near the scenic byway, and about a mile and a half up a fairly steep portion of the Ouachita Trail. 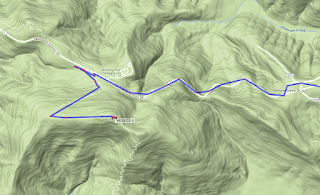 After a few hundred yards in the wrong direction (The sign that says 'mountain-top' doesn't really go to the top of the mountain..) I got re-oriented and proceeded up the trail. A short 45 minutes later I was on top and setup my station: 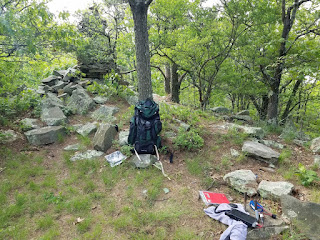 It was a great temperature that morning, but I was slightly concerned by the clouds to the west. The wind was howling more and more all the time, and the clouds were getting darker. I setup my dipole and went to work on 20m, hoping to find some New England QSO partiers to get me started... Once again, early in the morning I found the bands to be slim pickings, but there was something else... signals were all over the place, tremendously up and down.. I checked all my equipment and everything looked good, I couldn't figure out what was going on. Finally I got thru to one of the contesters and he promptly informed me I was one of the only people he had heard that morning. Apparently there was a G3 magnetic storm going on, and the bands were garbage.

I briefly considered what to do... I normally operate SOTA using between 15-20W, but since I have the 857, I *can* go QRO if I so desire, all the way to 100W if need be. My LiFePo4 battery will easily handle the voltage pull, but it will suck the amps out FAST at full bore, and I really don't like doing it. I compromised and turned the power up to 50W.. that helped.. I grabbed 3 more QSOs from contesters and got enough for my activation... phew.. I managed to get a spot out on the cell phone too (which was also acting wonky) and had a brief pileup of SOTA chasers. After everything subsided, I looked west again... clouds still not good, and now that my phone was working, I was able to see some hits on the radar too. I was planning on hiking out to Rough Mountain from here, but it would likely be 2-3 hours before I got back to the Jeep if I did, and I just wasn't in the mood to get rained on... I decided to postpone Rough Mountain for another time.

Before I left though, I did grab some quick video from the top:

After the hike back down, I jumped in the jeep and decided what to do next... I still had a few hours before I had to meet my family for lunch, but I had pretty well exhausted the peaks in the area. There was one more off to the west that I had missed the day before, Lenox Ridge (W5O/OU-021), and it looked like it was close to the road, so I could run for cover if the rain started. I headed west to the turnoff, and down a surprisingly pleasant forest service road until I reached the spot. 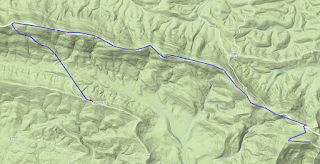 It did rain on me a bit just as I got on site, but not enough to be a problem.. I setup my dipole and waited for the rain to completely clear, before getting out my radio. Once it did I managed to get a spot out and started calling CQ. I actually had a pretty good little pile going there for a bit, and picked up a very respectable 27 QSOs over the course of about 30 minutes. By this time it was approaching noon, and I had a meeting with the family a couple mountains back to the east to attend too. I cleaned up my gear, jumped in the jeep, and updated my APRS message to state my weekend was over.