One of the most contentious concepts when building Satellite stations is the idea of polarity. Normally with terrestrial stuff, this concept is pretty easy to understand. FM is usually vertical (due to the prevalent whip antenna that is everywhere) and sideband/weak signal stuff is usually horizontal (for ground gain). Satellites - and for that matter EME and Scatter - don't quite follow the same rules though. Polarity can get messed up on the signal by all sorts of things in transit, and considering with birds we're dealing with powers <1W often, having that extra 30db of gain you get by matching your polarity exactly makes a big frigging difference. Of the birds that are floating up there, all but FO29 and AO7 currently have linear antennae on them, so to get the best match you want a linear antenna down here on earth, aligned perfectly to what the bird in space is aligned too. This obviously gets tricky in a fixed position station. Enter the X-Pol antenna, which I spoke about here. Now the question comes though, how do you best take advantage of what is basically 2 different antennae, with 2 different feed points, with a single radio?

I decided to use Tohtsu CX-520D relays to best utilize the X-Pol design. They take 2 N-Inputs and put them on 1 N-Input, and switch between sides based on a 12VDC current. Current off - Take the horizontal side.. current on - take the vertical side. I had, of course, do a little soldering to make it work the way I wanted, but I attached a little stub of wire, and then put 12VDC quick connectors on the wire, so I essentially had a 'plug' so I could disconnect the long run of wires back to the shack, and keep the relay in place. 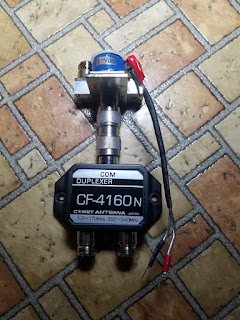 Coming out of the common side of relay I hooked in a N-Type Barrel connector, and then went straight into the common side of a Comet CF-4160n duplexer. Obviously on the 2M side I'm using the 2M side, and on the 70cm side I'm using the 70cm side. In Satellites since we're receiving a signal at the same time we're transmitting a signal, the concept of 'desense' comes into play often, where a 2M transmission will overwhelm the 70cm receive. I've never had this problem with my Icom 821, but I didn't want to chance it. The duplexers essentially act as a filter to make sure only the signals I want are coming in the coax I want them to come in. 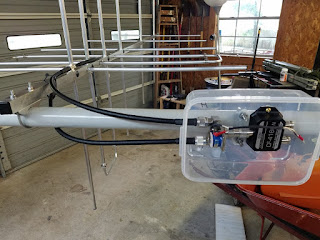 Finally I mounted everything inside a waterproof plastic box, and sealed up the coax ingress/egress points with silicon. I took a U-Clamp and attached the box to my cross boom, then cut specific LMR400 length to go from the Relay to the different polarity side of the antenna. I sealed up the coax holes with Silicone, let it all dry, then took the whole thing outside and stuck it up on the mast. 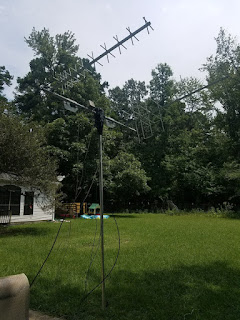 
The goal was simple with my controller, adjust my polarity from the computer. That way when I was remoted in from another location, I could make changes no matter where I was. A quick search of Amazon led me to THESE little gizmos. For $29 and free shipping I could click a button on my computer, and open and close a 12V circuit. This worked perfectly to control the Tohtsu relays, as well as turn on/off my Preamp, and do things like wire in a PTT toggle switch and control a small 12V LED light above my computer. I stuck it to a piece of plywood, and then used some Marine 12V bus connectors (to split the power from my power supply) to wire everything out so it was clean. 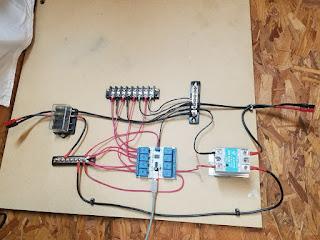 I fused everything (cause duh) and I also wired in a Solid State relay (12VDC in - 12VDC out) that I tried using to turn the power on and off to my 821, however I found out later that most SSR's have an inherent 10%-15% voltage drop across them under load, which doesn't work to well for sensitive Icom's. There are specific SSR's that don't have that high of a drop I've found since, but for now I've just been leaving my rig on when I need to use it remote (more on that later). Final product was clean and easy, and gave me a great source of 12V control in the shop, all from the computer.