With the completion of the K0D expedition, I was 487/488 on the CONUS grid chase via Satellite. EM41 was the only remainder.  I briefly considered making the drive myself and using a club/1x1 call to wrap it up, but at the same time I kind of wanted to be at the controls of KG5CCI personally for the last one. I decide to be patient, and lo and behold another fellow operator came to the rescue.

Brian, KG5GJT, had a trip planned to Natchez, MS with his wife for their anniversary. Somehow using sweet talking mysticism that I have yet to perfect on my better half, he convinced her to let him do a few satellite passes while they were there. After a few missed attempts on AO-85, on 11/19/2017 at 0356z we made contact on SO-50. EM41 was in the logbook. And then there were none. 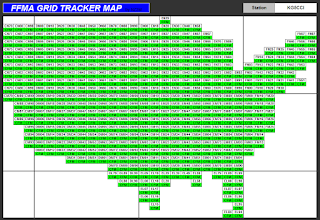 All 488 grids in the lower 48 United States were in the log. My first Satellite contact was on July 13th, of 2014, and after making slightly over 4800 QSOs on the birds, 3 years and 4 months later I had em all. Mission Accomplished. 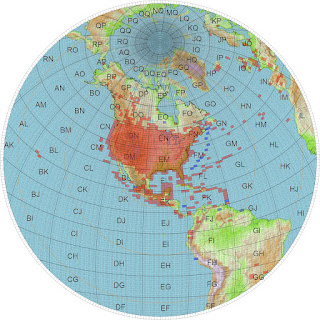 My global Map Looks pretty good too now - with a big pile of red over the US, much of Mexico, and a portion of Canada, South America, and Europe. 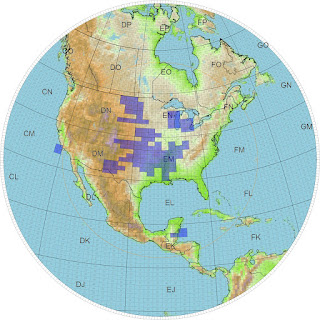 Even with the chasing, I'm even more proud of my Satellite rover map. In the same time frame I had activated 107 different grids on Satellites. I plan for this map to become more and more populated over the coming years, as it truly is better to give than to receive, and I know I've helped many other chasers on the way to their goal as well.

As best as I can tell, 164 unique operators were responsible for the 488 grids. That means there was some serious rover action that took place. In some cases (like the W1AW/x calls) I'm really not sure who the operator was, so I left those alone, in other cases were a 1x1 was used by a group of activators, I gave both ops credit. With that in mind, my top 10 looks like this:

Full Stats in a spreadsheet HERE if you are really that interested.

To all the operators along the way, especially the crazy rovers who spend much time and fuel going to places way off the beaten path, to help color in blank squares on a map. Now that this obsession has been put to bed, I can focus on what comes next.