YADR (Yet another distance record) on FO-29

Back in November my good buddy Jerome, F4DXV, sent me a message asking if I wanted to try breaking the FO-29 distance record with him again. We already held the record, but never one to shy from a challenge I said sure. He had already figured out the perfect pass, had a new spot on his end, and just asked me to get to one of my spot in the wee hours of the morning No big thing :) 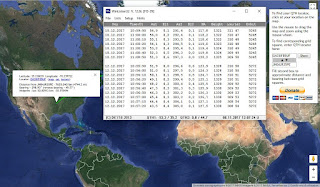 We actually had 2 days we could work with, December 10th or December 12th. Both days had a window, neither really favored either operator, and both had a 0.6° Maximum elevation window for with FO-29 at true apogee during the pass. We agreed to try for both - cause you never know what will happen. Good thing we did too, because some of the fiercest weather of the year struck France on the 10th, with driving rain and wind, making it impossible for Jerome to get to his spot. We crossed our fingers though, and set a sked for 2 days later.

The morning of the 12th I drug myself out of bed at 2:45AM (local) and stumbled to the car. Quickly downing some caffeine and Cliff bars, I turned on some Metallica and navigated 90 miles Northwest to Mt. Nebo State Park near Dardenelle, AR in EM35. This was the location I used during our last FO-29 record, although I did park just shy of the summit this time, to take advantage of a slightly better angle for the pass, and to shelter myself from a strong westerly wind that was blowing. 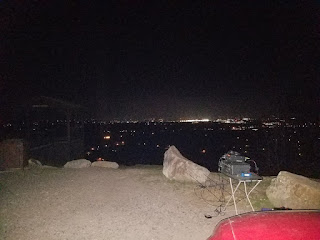 Jerome was already setup on his side, at his spot in JN04 up on a small hill. The weather still wasn't great, but it was a lot better than it had been the previous window. Via Twitter we both confirmed we were setup, picked a frequency and got ready to set another record. 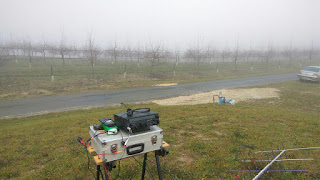 We both had video going - though like normal Jerome's turned out way better than mine did. Having daylight helped :)

Here's my 'Video' that I took of our contact. All you can really see is my red headlamp, but the audio is there. I had my headphones plugged in by themselves at first (just in case the audio splitter was lowering my volume) but after I dialed Jerome in I popped it back in so you could hear both sides of the QSO.

And that's all she wrote. 7635km on FO-29 in the books. As you can tell from the videos, we had PLENTY of time to make the QSO. Enough time to rag chew and play with power settings even. What does this mean? It means that further is most definitely possible. Probably better bookmark this blog for 6-12 months from now, to see what we've done next :).